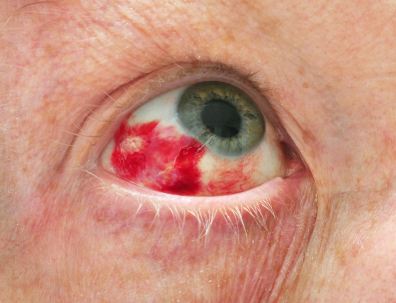 A greeter at a Wal-Mart fell and immediately suffered changed vision. He said the fall caused the retina to detach in one eye. However, he previously suffered a retina detachment in his other eye that wasn’t work related. Did he get workers’ comp benefits for the eye injury?

Richard Basham worked as a greeter at a Wal-Mart in West Virginia. On April 28, 2016, Basham caught his foot on a tile and fell backward. As he was falling, Basham hit his head against a sign that was bolted to the floor.

Immediately after the fall, Basham said he could only see red from his left eye. The next day he saw a retina specialist who diagnosed a retinal detachment in his left eye similar to what had developed in his right eye in 2015. Basham had surgery on the eye.

A claims administrator rejected Basham’s request for workers’ comp, stating it was unable to determine that the injury occurred as a result of employment.

An independent medical evaluation of Basham was performed on May 4, 2017. The doctor who performed the IME concluded Basham suffered injuries to his left eye when he fell at work.

An ophthalmologist also reviewed Basham’s medical records and the surveillance video of the incident and wrote a report dated Aug. 8, 2017. That doctor concluded there was no direct connection between Basham’s fall at work and his retinal detachment. The ophthalmologist said a logical explanation would be that the process of detachment started days or weeks earlier, similar to what had occurred with his right eye. The doctor also pointed to times in the surveillance video when Basham was rubbing his eyes, saying excessive eye rubbing puts a high pressure on the eye, including a weakened retina.

The West Virginia Workers’ Compensation Office of Judges found Basham proved he suffered an injury to his eye in the course of and resulting from his employment. The Office of Judges specifically found he suffered visual loss and a retinal detachment of his left eye as a result of the injury, noting in an exam two months before his injury, Basham had no symptoms of blurred vision.

The Workers’ Compensation Board of Review upheld the finding. Wal-Mart appealed.

The West Virginia Supreme Court of Appeals recently upheld the decision. The court said after review, the judges agree with the reasoning and conclusions of the Office of Judges. Basham’s detached retina occurred as a result of a workplace injury.