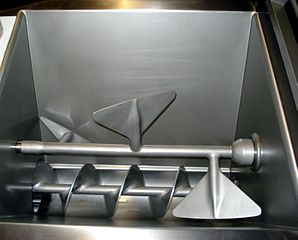 An industrial meat grinder was just moments away from breaking a worker’s neck before it was shut off. Now Cal/OSHA has issued fines to two companies in connection to the incident.

The worker suffered a crushed right hand, a broken arm and nerve damage. Cal/OSHA says neither company trained the employee to safely operate or clean the meat grinder.

While the employee was trying to remove ground beef stuck inside a meat mixer which moves beef into the grinder, the paddles started to rotate.

According to San Luis Obispo’s Fire Battalion Chief, the machine’s paddles broke the worker’s arm on their first pass, then came around again and broke his arm again further up. The fire chief said had co-workers not heard the man’s screams, the next pass of the paddles could have broken his neck. Co-workers shut off the machine just in time.

Fire officials believe the long sleeve of the worker’s coat got caught in the machine and pulled him in.

A photo taken by a firefighter shows the man entangled in the machine up to his waist, his legs pointed upward, with rescuers on all sides.

Cal/OSHA says Vitco didn’t require employees to disengage the power on industrial equipment before cleaning it. Also, the company lacked specific procedures for powering down the meat grinder. Vitco was issued nine citations with fines totaling $63,900.

Volt received a serious citation for failing to ensure that Vitco had an injury and illness prevention program or safety training for employees who ground meat. The staffing agency received three other citations with total fines of $10,600.

“When companies hire temporary employees, they do not sign away their responsibilities to protect workers from industrial accidents,” said Cal/OSHA Chief Juliann Sum. “Both temporary employment agencies and host employers are required to ensure workers are trained and understand safety procedures.”