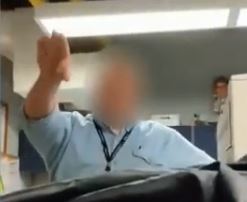 A video posted on YouTube shows an American Airlines supervisor yelling at a mechanic for “writing s*** up.” The mechanic says he was just doing his duty to report potential safety issues.

CBS2 in Chicago interviewed mechanic Jason Lopata who recorded the video of his supervisor yelling at him:

The supervisor’s complaint: He accuses Lopata of writing up problems at the end of his shift and then leaving without fixing them.

Lopata says this isn’t the first time this has happened to him. The mechanic alleges this is a systemic problem with the airline because it wants to avoid flight delays. He filed a formal complaint with the airline and the Federal Aviation Administration in November, but he says nothing has been done.

So Lopata’s next step was to reach out to the Chicago TV station to tell his story.

“If I find something that is unsafe, I am legally bound to report it,” Lopata said.

The mechanic says he doesn’t want his supervisor fired because the problem goes beyond just one person.

American Airlines says the supervisor has been removed from duty while it investigates.

Responding to what Lopata told the TV station, the airline said it’s proud of its strong safety record and noted it’s involved in a heated contract battle with the mechanic’s issue. It added it considers Lopata’s case a human issue, not a union issue.