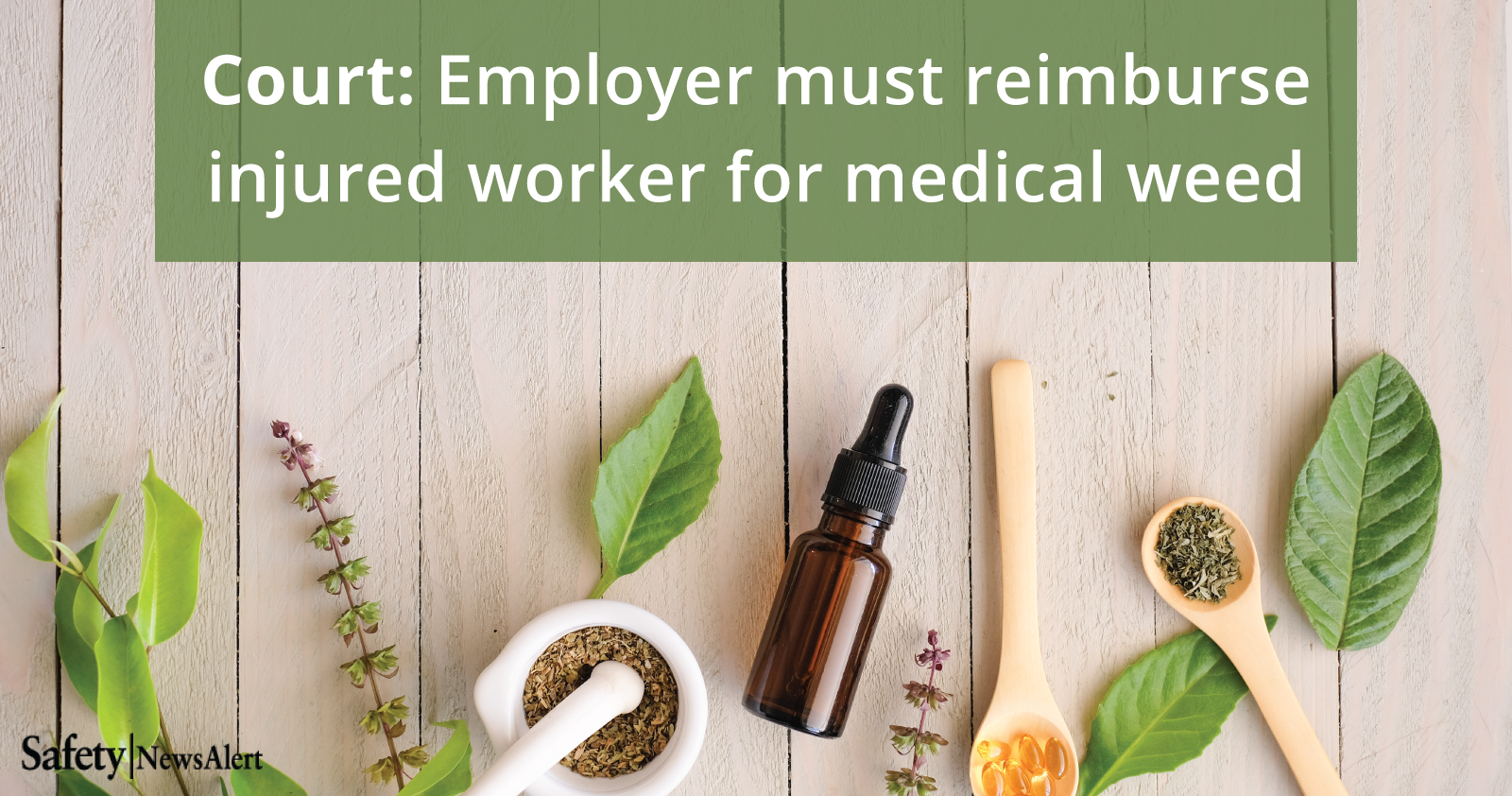 A New Jersey employer must reimburse an injured worker for medical marijuana, according to an appeals court decision.

The court found a workers’ comp judge’s order doesn’t require the company to possess, manufacture or distribute marijuana, so there is no conflict between the state’s Medical Marijuana Act and the federal Controlled Substances Act.

Truckload of concrete dumped on him

In 2001, Vincent Hager was employed by M&K Construction and was working on a company jobsite when a truck delivering concrete dumped its load onto him.

Hager suffered lower back pain radiating down both legs and was diagnosed with central disc herniation, annular disc bulging and other spinal problems, and was told to see a neurosurgeon.

The company denied Hager’s workers’ compensation claim, stating it was investigating the incident.

Hager used his private health insurance to pay his medical bills, but in December 2001, when the pain prevented him from working, he left M&K.

His health insurance was terminated Jan. 2002, so he could no longer afford testing and treatment for his condition.

M&K continued to deny workers’ comp benefits, so Hager hired an attorney who referred him to another neurosurgeon.

From 2003 to 2011, Hager suffered extreme pain, underwent two unsuccessful surgeries to relieve the pain and was eventually prescribed a variety of opioid pain medications.

In November 2015, a doctor diagnosed Hager with chronic debilitating pain and stated his condition was unlikely to improve.

Further, his long-term use of opiate medications caused excessive sensitivity to pain and dependency on the drugs.

A few months later, Hager told another doctor he wanted an alternative to the opioids, so the doctor suggested medical marijuana.

After going through the extensive registration process for medical marijuana use, Hager was provided with a prescription, paying $616 a month out-of-pocket.

In May 2016, he told his doctor the medical marijuana provided some relief from the pain, he was sleeping better and he had stopped taking opioids.

M&K agreed in November 2016 that Hager should receive workers’ compensation benefits, but it refused to pay for the medical marijuana, so Hager filed a dispute with the judge of compensation.

On appeal, the company argued the federal Controlled Substances Act – which makes the manufacture, possession or distribution of marijuana a crime – preempts the New Jersey Compassionate Use Medical Marijuana Act since it’s impossible to comply with both laws.

Because the order doesn’t require M&K to possess, manufacture or distribute marijuana, but only reimburse Hager for his purchases of the drug, the appeals court found no conflict between the federal and state laws.

Further, Hager had successfully demonstrated the severity and chronic nature of his pain, how he attempted to alleviate that pain through multiple unsuccessful methods and how effective the medical marijuana had been, so the court stated use of the drug was reasonable and necessary.