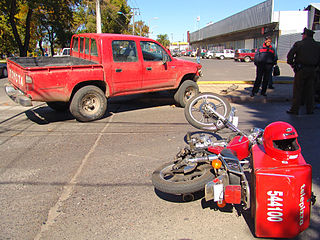 An employee was allowed to use a company vehicle for work and personal purposes. One day, after having four beers, he was in a crash that injured another driver. Does the company’s auto insurer have to pay the $1 million in damages awarded to the other driver?

Brian Hensley worked for Looper Cabinet Co. in Georgia. Looper allowed Hensley to drive a pick-up truck for both work and personal purposes.

On June 10, 2012, Hensley drank four beers and then left his father’s house in the Looper pick-up. A motorcycle driven by Ulysses Anderson tried to pass Hensley resulting in a crash that left Anderson severely injured.

Anderson sued Hensley, alleging he drove while under the influence of alcohol and caused the crash. A jury found Hensley liable and awarded Anderson approximately $1 million in damages.

Looper’s substance abuse policy states, “An impaired employee will not be allowed to drive.”

The company’s umbrella auto insurance policy covered “any person with respect to any auto owned by [Looper], loaned to it, or hired by it, or on its behalf, and used by that person or organization with its permission.”

Was he covered after drinking?

The 11th Circuit noted that, for insurance coverage in Georgia, someone using an automobile with the express permission of the insured party is a permitted user. Whether liability coverage is provided to the third-party hinges on whether the person exceeded the scope of permission granted by the owner.

The federal court said that in 1968, the Georgia Supreme Court found:

“Even in scenarios where employees violated express prohibitions, insurers had been found liable where the use to which the car was being put was within the scope of the initial permission.”

However, 29 years later, a Georgia Court of Appeals issued a finding that runs counter to the 1968 state supreme court decision. The appeals court said “where a driver uses a vehicle with permission, but violates the scope of the permission granted by engaging in activity the named insured has expressly forbidden, the driver is not an insured under the permissive use clause.”

The federal district court used the appeals court ruling as its basis for granting summary judgment to Looper.

There’s no dispute that Hensley was allowed to drive the Looper truck for his own use, and that’s what happened on the day of the crash. Because of that, the 11th Circuit found Hensley was covered under Looper’s auto insurance policy.

This ruling appears to leave two choices for employers when it comes to their company vehicles: