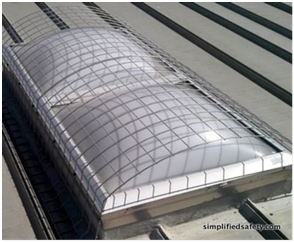 Last year, an HVAC installer fell through a skylight and died during a construction project in Athens, GA. OSHA recently fined the contractor $54,000 for failing to prevent the tragic accident.

Martin Mechanical Contractors was subcontracted to install a complete HVAC system at a new Subaru car dealership in Athens, GA. Timothy Gearing was a worker for the company.

Gearing and a co-worker were atop the building trying to unjam a saw stuck to the metal roof on Nov. 30, 2015. When the saw jerked loose, Gearing lost his balance and fell through an unguarded skylight.

Gearing, 39, fell 15 feet to the concrete ground below. He was rushed to the hospital, where he later died of his injuries.

OSHA cited Martin Mechanical with one willful and one other-than-serious violations for failure to:

The one willful violation accounted for $49,000 of the total penalty.

OSHA’s General Industry Standard requires that every skylight floor opening and hole shall be guarded by a standard skylight screen or a fixed standard railing on all exposed sides. Skylight screens should also be capable of withstanding a load of at least 200 pounds.

“This tragedy was preventable. Martin Mechanical Contractors knowingly exposed its workers to dangerous fall hazards and failed to take action to prevent them,” said William Fulcher, OSHA’s area director in the Atlanta-East Office, in a press release. “Employers are responsible for either addressing workplace hazards or not putting workers at risk of being injured or killed. Our investigation found Gearing’s employer did neither.”

Martin Mechanical is a mechanical, plumbing and electrical contractor for commercial and industrial building projects in Northeast Georgia. The company has no previous OSHA inspection history.

The company has 15 business days from receipt of the citations and proposed penalties to comply, request a conference with OSHA’s area director, or contest the findings before the independent Occupational Safety and Health Review Commission.