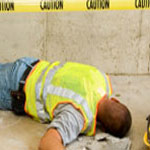 An employee was injured trying to rescue another worker. His employer says he shouldn’t get workers’ comp because attempting a rescue wasn’t part of his work duties. How did a court rule?

Franklin Pound worked for Pipeline Systems Inc. in Pennsylvania. On July 29, 2010, he was part of a team installing a new pipeline at a building. About 30 feet away from where Pound was working was a concrete pit.

Pound heard another worker call out for help, “Man down, Jack fell.” Pound and two of his co-workers rushed to the pit. Pound found that a worker was lying at the bottom. He climbed down a ladder with two others into the pit. The worker at the bottom of the pit had already died.

Pound says when he stood up in the pit, he felt as though his breath was being sucked out of him and he knew something was wrong.

He tried to climb out of the pit but lost consciousness before he could reach the top. Pound fell 20 feet to the bottom of the pit. His co-workers determined there was gas in the pit and pumped fresh air into it. There had been methane in the pit. Pound was hospitalized with injuries to his leg, knee, foot, ribs, back and lungs.

Pound filed for workers’ comp benefits. The company denied his claim saying he wasn’t in the course and scope of employment when he was injured.

Does law protect all rescuers?

The state court noted that a case previously decided by the Pennsylvania Supreme Court (Kmart) addressed the issue of employees suffering injuries when coming to the aid of a co-worker. In the case, a worker suffered post-traumatic stress disorder after helping a co-worker who was stabbed while eating lunch on the employer’s premises.

Both workers were off-duty at the time. Since the rescuer wasn’t required to be where the stabbing took place while on her lunch break, the court found she didn’t qualify for comp benefits.

As part of its decision in the case, the PA Supreme Court discussed the theory that “an employer derives a benefit from the goodwill created by the employee rendering aid or assistance to another and that this goodwill may bring injuries incurred while rendering aid” that would be covered by workers’ comp. The court rejected the idea.

That caused the Pennsylvania legislature to pass a new law to provide workers’ comp benefits for:

“an employee who, while in the course and scope of his employment, goes to the aid of a person and suffers injury or death as a direct result of … rendering emergency care, first aid, or rescue at the scene of the emergency.”

The WCJ and WCB found this law applied to Pound’s case: He was attempting to rescue or aid the employee who had fallen into the pit.

Pipeline Services argued the new law wasn’t meant to include all employees. It argued the law applied only to emergency personnel. The company claimed Pound’s actions as a “Good Samaritan” weren’t employment-related.

Pound noted that, unlike the situation in Kmart, he was on-duty at the time when the emergency arose. He also argued that the new law applied to all employees, not just emergency services workers.

As noted, the new law does require the rescuer to be working at the time to qualify for comp benefits. Pound was installing pipe just 30 feet away from the pit when he tried to rescue the fallen worker.

The state court found that, under the new law, attempts to rescue or help someone else don’t, in and of themselves, constitute an abandonment of employment.

For those reasons, the state court upheld the WCB’s decision that Pound is entitled to workers’ comp benefits.

Unfortunately, this case has the potential to send a wrong signal to employees regarding attempted rescues of other workers. Workers may assume that since the court awarded comp benefits, such rescues are always OK.

As a safety pro, you know you have to emphasize to workers that if they aren’t trained in rescue, they shouldn’t attempt one. There are too many cases in which one worker’s death led to one or more additional fatalities because the other workers died during a rescue attempt they weren’t trained to handle.

It’s human nature to want to help in these situations. It’s a selfless act. In the moment, workers aren’t thinking of themselves; they’re thinking of the other person.

Here’s one potential way to drive home the point that untrained workers shouldn’t attempt rescues: In that moment, think of the people who depend on you and what would happen if suddenly you weren’t around.

What do you think about this case? How do you drive home to workers that if they aren’t trained they shouldn’t attempt certain types of rescues? Let us know in the comments.