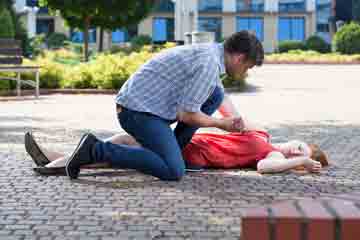 No one is arguing that this employee’s fainting spell on the job wasn’t caused by work. So why did she receive workers’ comp benefits after a recent court ruling?

Sharon Clements worked as a mess hall attendant at the Coast Guard Academy in New London, CT. She was an employer of Aramark Corp.

On Sept. 19, 2012, Clements arrived for work, walked from the parking lot into a building and down a hallway, then went through a door to go outside to get to the next building. While she was outdoors between the two buildings, she became light-headed, passed out and fell backward onto the pavement, hitting her head.

Clements was discovered by co-workers, who called for help. First responders found her lying on the ground with a bump on her head. She was unable to sign a consent from “because of her level of consciousness.” Clements was taken to the hospital where she was treated for a concussion.

While in the ER, Clements suffered cardiac arrest and then had a pacemaker inserted. She had a history of cardiac disease.

Based on her medical records, a workers’ compensation commissioner determined her injury didn’t arise out of her employment, but was caused by a “cardiogenic syncope.”

The Connecticut Workers’ Compensation Board affirmed the commissioner’s decision. Clements appealed to a state court.

Clements’ attorney relied on a 1937 Connecticut Supreme Court decision in its arguments. In that case, a church employee had been found in the basement recreation room at the rectory, lying flat on his back. He’d apparently fallen backward on the concrete floor and fractured his skull. The employee had previously suffered from a heart murmur.

“An injury received in the course of the employment does not cease to be one arising out of the employment merely because some infirmity due to disease has originally set in action the final and proximate cause of the injury. The employer of labor takes his workman as he finds him … “

Workers’ compensation benefits were awarded in that case.

Aramark argued the 1937 case was different because the church employee had been working on a ladder.

But the appeals court deciding Clements’ case disagreed. The court noted the church worker hadn’t fallen off a ladder. The court determined the worker had been standing on the ground, not on the ladder, when he fell backward.

The appeals court found the 1937 case to be very similar to Clements’. Therefore, it reversed the Board’s decision and said Clements should receive workers’ comp benefits.

In other words, Clements’ fainting spell wasn’t caused by work, but her concussion that she suffered when her head hit the ground at her workplace was.