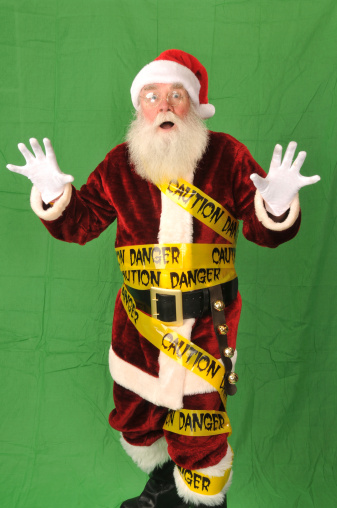 Have you ever stopped to think about how dangerous Santa’s job is?

But the folks at System Concepts have.

You can read their entire ergonomic risk assessment for Santa Clause here. Some highlights:

After finding System Concepts’ post via a link on Workers Comp Insider, I skimmed the article, taking in subheds first. Imagine my surprise when I saw the last section titled, “In charge of a vehicle under the influence of alcohol.”

I had to read that one a couple of times, first of all, because it might have been helpful to drop “while” in between “vehicle” and “under.” Otherwise, “vehicle under the influence of alcohol” makes it sound like Blitzen might have been blitzed.

When I realized the suggestion was that Santa might be imbibing on the job, I thought, I must be missing something here.

I then went back to the beginning of the post to find under “General job description” that Santa’s payment is in the form of tips – “generally mince pies and sherry.”

You see, System Concepts makes its home in England. Here in the U.S., I was always told we leave milk and cookies for Santa.

It turns out our friends across the pond have been bribing Santa with some adult beverages. At least now I know why he’s referred to as “a right jolly old elf.”

Have a safe and healthy holiday.