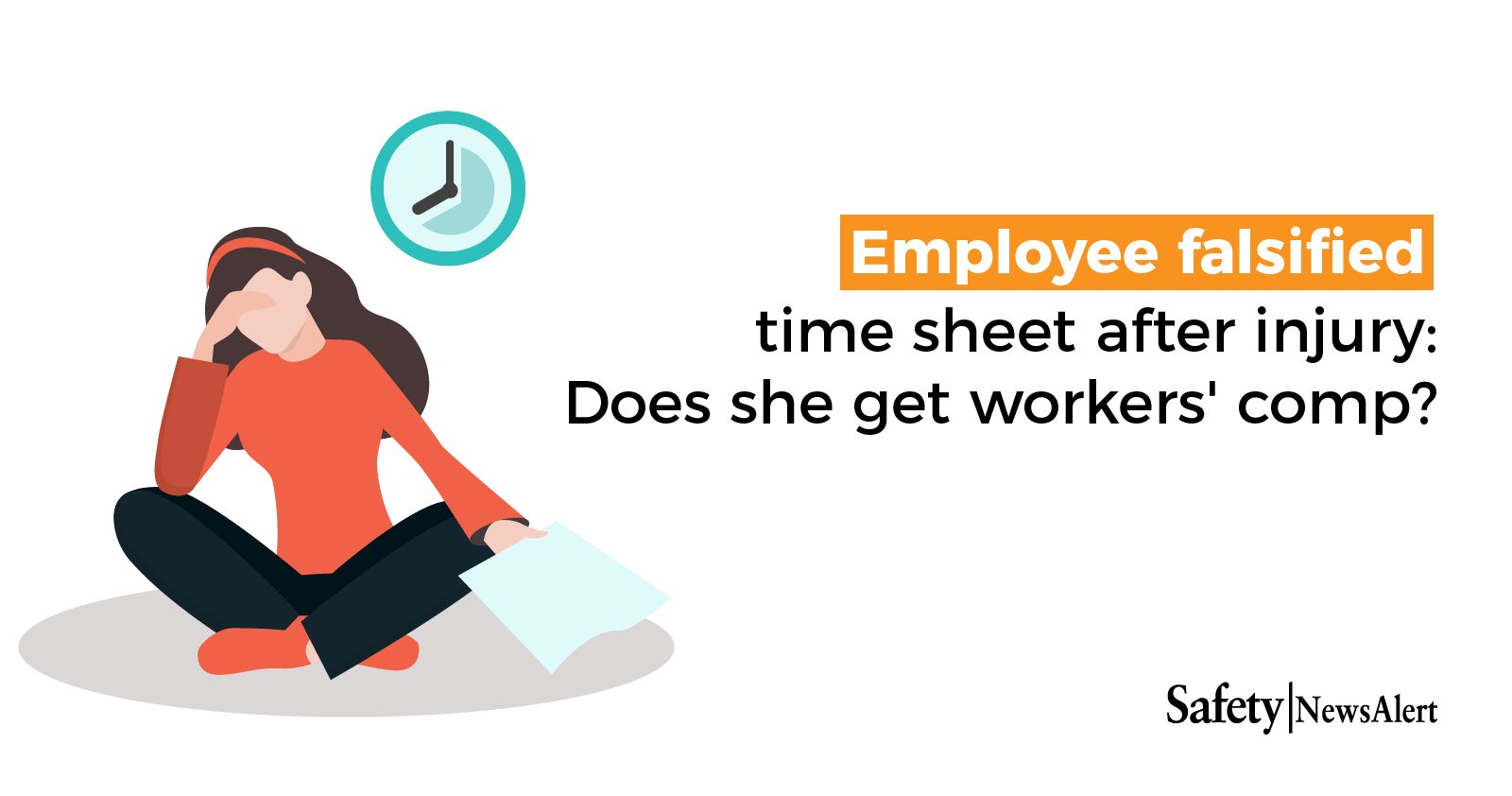 A payroll clerk submitted time sheets that said she worked when she didn’t. Does that negate her workers’ comp claim for a previous injury?

Tina Koch was a payroll clerk for Fresh Mark Inc. in Ohio. On April 19, 2016, she slipped on a wet floor and fell, injuring her left shoulder. She had shoulder surgery on July 21, 2016 and was off from work for several weeks.

While she was off from work, Fresh Mark accountants discovered discrepancies on Koch’s time sheets while conducting routine audits. The time sheets recorded 16 hours of work for June 19, June 26 and July 10, but the company’s system didn’t record badge swipes for Koch on those dates.

Fired or laid off?

When Koch returned to work on Sept. 19, 2016, her supervisor and Fresh Mark’s HR director confronted her about the time sheets.

Koch denied falsifying her time sheets but admitted she may have filled them out beforehand, anticipating the hours she would work, and she didn’t correct them before they were turned in.

The supervisor and HR director say they told Koch her employment was terminated for falsifying time records.

Koch says she was told she was given “a permanent layoff.”

Fresh Mark gave Koch a separation agreement document that said, “Fresh Mark hereby agrees not to oppose, object to, or otherwise contest any application for unemployment compensation benefits filed by Employee with the Ohio Department of Job and Family Services as long as the reason is permanent lay-off.”

Koch added additional language to the agreement and signed it, but her additions caused the company to reject it. Koch filed for total temporary disability starting the day she was terminated.

A staff hearing officer with the Ohio Industrial Commission denied her claim, stating Koch’s “failure to rectify the known errors in her time records resulted in false information being provided to the Employer.” That would mean she was fired for cause and wouldn’t be eligible for workers’ comp benefits under state law.

Koch appealed, arguing that the separation agreement proved she was fired as part of a “permanent layoff,” not for cause.

But an appeals court rejected Koch’s argument. It said what was stated in the proposed separation agreement wasn’t the only factor in determining whether Koch was fired for cause.

The court said there was other evidence she was fired for cause: She didn’t correct her time sheets, and that resulted in her receiving pay she didn’t earn. The court also credited testimony from Koch’s supervisor and the HR director.

Koch noted that Ohio law prohibits workers who have been fired for cause from collecting unemployment benefits.

True enough, the court said, but in her case that didn’t negate the rest of the evidence.

The court upheld the denial of workers’ comp benefits for Koch.

But what about Fresh Mark’s proposed deal with Koch that it wouldn’t contest her unemployment benefits if she represented her termination as a lay-off? The company may not be off the hook about that.

The court said the state attorney general’s office represented the Ohio Industrial Commission in Koch’s case, therefore it knows about the terms of Fresh Mark’s settlement proposal and is in a position to take further action if appropriate.