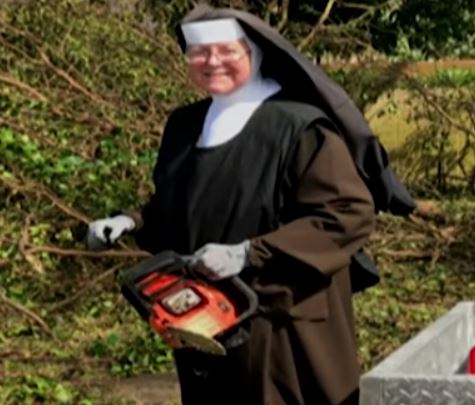 Sister Margaret Ann probably doesn’t realize she’s helped create a safety video – of what NOT to do when using a chainsaw.

It’s hard to criticize anyone helping in the cleanup after hurricanes Harvey and Irma.

But there’s no reason anyone should add to the tragedy caused by these two monster storms by getting seriously injured – or worse – in cleanup efforts.

According to a variety of news websites, Sister Margaret Ann, principal of Coleman F. Carroll High School near Miami, was spotted by an off-duty Miami-Dade Police Department officer using a chainsaw to clear fallen trees from a road in the aftermath of Irma. The officer shot a short video of the nun.

Sister is in full habit – in the wind no less. The only protection gear apparent are an apron, gloves and whatever protection she might get from what appears to be regular eyeglasses. Take a look at this video posted by Time magazine:

We can’t claim to be the first one to notice Sister’s lack of proper safety gear. This comment was posted on ABC News’ version of the story:

According to CNN, the off-duty officer told Sister Margaret Ann, “You know though, Sister, the police will do this,” to which she replied, “but it’s going to take them too long … it’s dangerous, people are going to get hurt here.”

Well, we don’t want you, Sister Margaret Ann, or anyone else using a chainsaw to clear hurricane debris to get hurt either. Please take proper precautions next time you decide to help by using a chainsaw.