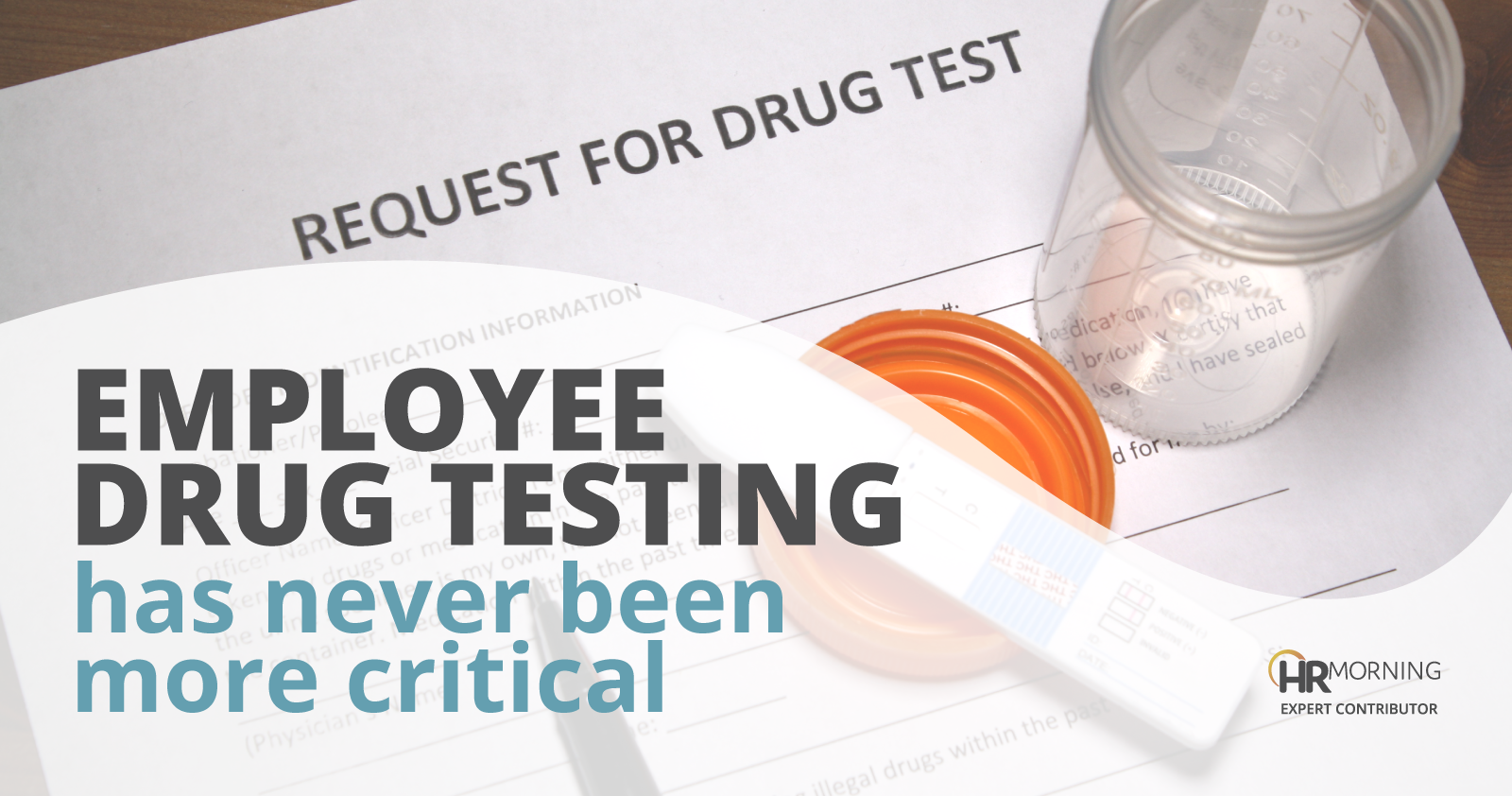 During this COVID-19 pandemic, workplace drug testing will require new rules and new precaution, but it should never be compromised.

Here’s a real-life incident involving a test subject who, while waiting to take a drug test, realized that a co-worker was coughing in the restroom. He then refused to enter the restroom because there was a risk that his co-worker might have COVID-19.

The test was being conducted at a remote location in a company trailer on-site. There was no other restroom available.

The employee’s concern was valid, of course, because the coronavirus is highly contagious.

But it understandably raised a red flag that perhaps he was avoiding the test. Only a short time before, he was willing to work alongside the co-worker with no apparent concern for his health.

How would your organization handle this situation?

Things changed rapidly after COVID-19 made its way to the United States.

Drug testing companies immediately increased their safety measures to provide the safest environment for both employees and their collectors.

The CDC recommends taking extra precautions around any body fluids. Face shields or masks are worn to protect both collectors and test subjects. Moreover, fresh gloves are used for each drug test.

The most commonly used employee drug test is the urine test. Of course, normal procedures include sanitizing the restrooms between tests. Still, sanitation measures have been increased to ensure further safety.

In addition, drug testing facilities have beefed up other sanitation procedures, such as frequently cleaning hard surfaces like countertops, chairs, and doorknobs.

Moreover, collectors follow specific guidelines to clean breathalyzers after each use.

If your employees express concern about reporting for a drug test, you can assure them that there are guidelines in place to protect them from the spread of the virus.

If an employee refuses a drug test for any reason—even COVID-19 concerns—it’s reported as a refusal to test.

Collectors document the refusal and follow the company’s guidelines as outlined in its refusal to test policy. A well-documented report is key. It allows the employer or company representative to decide how to handle the situation from that point.

If the company is regulated by the DOT, refusals to test are reported to the MRO (Medical Review Officer). Employers of the general workforce usually appoint someone to be in charge of company drug testing. In either case, the documentation is reviewed. Then, it’s determined whether or not the circumstance is deemed a refusal to test.

Employers that aren’t held to government regulations may want to consider updating your drug-free policies and procedures. State clearly within the policy that if anyone refuses a drug test due to a current health concern—such as we find ourselves in now—the employee agrees that their employer has the right to randomly test them at any point in time that the employer chooses after the crisis has passed.

This change in policy reduces the risk of your company being accused of singling someone out should you ask them to randomly take a drug test after having refused a test during a health crisis.

Employees who use drugs are likely to try and wheedle their way out of taking a drug test with some type of excuse. A nationwide health crisis falls into that category. A policy update gives you the right to have that employee tested at your discretion once the crisis passes.

If you’re federally regulated, adding this policy change allows you to administer a non-DOT drug test at another time.

Speaking of the government

There’s been a rumor surfacing on social media that the DOT is not requiring drug testing during the COVID-19 outbreak.

In fact, the U.S. Department of Transportation released a statement near the end of March that touched on the importance of continued drug testing during this time.

Our nation is depending on the transportation industry to keep shelves stocked with needed food and supplies. It’s also responsible for seeing that needed medical supplies and personal protective gear (PPG) arrive at their destinations.

Overall, the department is committed to maintaining public safety while allowing the

transportation industries to operate safely and efficiently during this national crisis.

A person who uses drugs or alcohol is likely to rely on them as a way of coping with a situation—especially, during a time of high anxiety. It’s imperative that the DOT carries on with scheduled drug testing.

The U.S. Department of Transportation’s statement supplied employers of the safety-sensitive workforce with a set of guidelines to follow during this turbulent time.

They noted that drug testing must continue unless the employer found themselves in a region of the country that no longer had testing resources available to them due to a reduced workforce. They suggest using a mobile drug testing company if fixed-site facilities aren’t available to them.

If drug testing isn’t possible due to a reduced workforce, state or local quarantine measures in place, or other impediments, the employer should document why a test wasn’t completed. Furthermore, if a pre-employment drug test isn’t completed, employers can’t allow a prospective employee to perform any DOT safety-sensitive functions.

The number one reason that employers drug test their employees is to provide the safest possible work environment for everyone. It’s a well-known fact that drug impairment puts the employee—and those nearby—at a greater risk of being involved in a workplace accident.

Moreover, drug use affects employers in a number of ways.

No one wakes up one day and decides to become an addict.

Sadly, though, statistics show that 50% of drug addicts are born genetically predisposed. The other 50% begin using drugs or alcohol as a coping mechanism and become dependent on their drug of choice.

Even though many companies have employees working from home during this pandemic, others are working countless hours of overtime in factories, hospitals, and other essential businesses to keep our nation supplied with the goods and services that we need to survive.

Overall, employee drug testing should continue because it plays an important role in society. Everyone deserves the right to go to work without fearing for their safety.

Moreover, identifying employees who use drugs allows you to point them in the direction of help. Even someone who refuses to admit to themselves that they have a problem finds it hard not to come to that realization if they’ve lost their job because of it.

After seeing firsthand the effects of employee drug use, David Bell worked his way into the industry and up to his current role as CEO of USA Mobile Drug Testing, so that he could help employers ensure a safer and more productive workplace. Today he writes extensively on compliance and speaks at industry events to help educate employers.