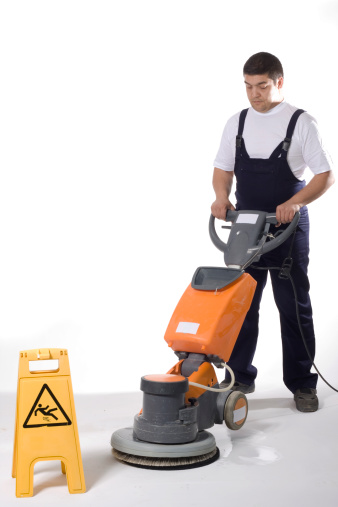 No one is questioning that this worker developed occupational asthma from exposure to a chemical in floor wax. The question is how long her workers’ comp benefits should last.

Nancy Little worked as a registered nurse for Select Specialty Hospital in Pennsylvania.

Little had been working at the facility for about four years when one day in April 2010 she had trouble breathing. She went directly to the emergency room at another hospital where she was treated with a nebulizer to open her airways. She returned to work after a couple of days.

About a month later, she started sneezing and coughing at work one day. Little noticed a housekeeping employee was waxing the floors. Once again she went to the ER where she received treatment to help her breathing. ER personnel referred her for further treatment. She didn’t return to work for three weeks.

A month and a half later, Little experienced a third episode at work and went to the ER. This time her condition was worse. She didn’t return to work for Select.

Little applied for workers’ comp benefits. Select agreed to cover Little’s medical costs only for “an allergic reaction to the floor wax.”

But Little also wanted total disability coverage for the time she missed work. Select denied that part of the claim.

In November, Little started working part-time at another hospital. At her interview, she explained she left her job with Select because of her reaction to the floor wax the facility used. Her new employer used the same product but immediately changed to another one. Little didn’t have any breathing problems while working for her new employer.

A workers’ comp judge (WCJ) conducted a hearing on Little’s request for total disability coverage for the periods when she was out of work.

Select submitted a medical report from a pulmonologist who examined Little. He agreed with the toxicologist, but also said that as of a February 2011 exam, Little had fully recovered from her work-related asthma.

Based on all this, the WCJ awarded Little total disability benefits for the time she missed work after the first two episodes and from the third episode until she started working part-time for the new employer. The WCJ also awarded partial disability benefits until February 2011 when the pulmonologist said Little had fully recovered.

Little appealed the decision, arguing that her partial disability benefits should continue because she can’t return to her original job and she suffered a wage loss.

The Workers’ Compensation Appeal Board upheld the WCJ’s decision. Now a state court has weighed in.

Select argued that Little was fully recovered with no residual disability, so the original ruling should stand.

Part of the report from the pulmonologist turned out to be key in this decision. The doctor stated:

“She cannot return to work unless it is assured that she will have no further exposures to this cleaning agent. A repeat exposure could result in a more severe and potentially life-threatening reaction.”

“Regardless of whether the Claimant lacks current pulmonary symptoms or does not need current treatment, these are residual medical conditions that Claimant did not have prior to her employment with [Select],” the court wrote. “Therefore, the WCJ erred in terminating Claimant’s benefits as of physician’s February 2011 examination.”

So the court reversed the WCJ’s order and remanded the case to determine ongoing partial disability benefits for Little.

What do you think about the court’s decision? Let us know in the comments below.