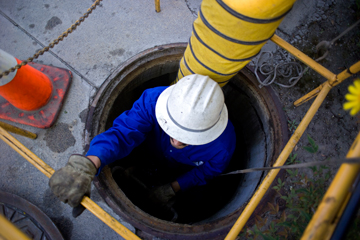 This tragic story provides an important reminder to workers about confined spaces: If they don’t have the proper equipment and training to perform a rescue, they’re risking their own lives by going in to help a co-worker.

OSHA has cited Douglas N. Higgins Inc. and its related contracting company, McKenna Contracting LLC, with 10 serious violations totaling $119,507 in penalties in connection with the deaths of three workers in a manhole in Key Largo, FL, on Jan. 16, 2017.

Testing showed lethal levels of hydrogen sulfide and carbon monoxide in the manhole. Two other employees and a volunteer firefighter were also exposed to the toxic gases but survived.

OSHA cited Higgins and McKenna for failing to:

The companies have 15 business days from receipt of the citations to pay the fines, enter talks with OSHA, or appeal to the Occupational Safety and Health Review Commission.

The National Institute of Occupational Safety and Health says more than 60% of confined space fatalities occur among would-be rescuers.