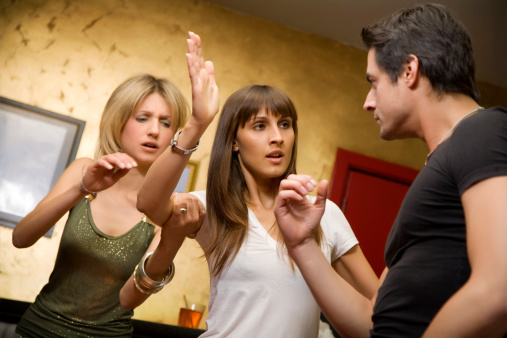 A waitress was injured in a bar fight. Just over a week later, she needed brain surgery due to a hemorrhage. But she also had a pre-existing condition, and her employer thinks she suffered an injury in a different incident. Did she get workers’ comp?

Sarah Sorensen worked as a waitress at the Harbor Bar in South Dakota.

On Dec. 31, 2009, she tried to break up a bar fight and was punched and knocked to the floor. She finished her shift that night, all the while developing black eyes and a headache from the encounter.

On the morning of Jan. 7, 2010, Sorensen suffered severe headaches and vomiting. Her boyfriend took her to the ER, and an MRI revealed a massive intraventricular hemorrhage in her brain. She had brain surgery the next day.

The doctor performed the third surgery after determining Sorensen suffered from moyamoya disease, which results in the closing of some major blood vessels in the brain. As a result, a network of smaller and less stable vessels grow in an attempt to supply the brain with the necessary nutrients. The smaller vessels make the brain more prone to bleeding, including the possibility of a major brain bleed.

Sorensen applied for workers’ comp benefits to cover her medical costs and loss of work. She now sufferes serious mental defects, such as memory loss. She isn’t able to manage her own affairs.

Harbor Bar denied her claim. The South Dakota Department of Labor determined the first two surgeries were the result of a workplace injury, but the third surgery was due to the moyamoya disease alone.

Dr. Asfora testified the workplace injury was a major contributing cause of Sorensen’s brain hemorrhage. Her moyamoya disease was asymptomatic before the bar fight, the doctor said, and the punches she suffered were likely the cause of the hemorrhage.

Harbor Bar called another doctor as an expert who had reviewed Sorensen’s medical records but never treated her. He didn’t believe the fight was a major contributing cause of her brain injury because she was able to continue her normal activities in the days afterward.

Sorensen’s employer also introduced testimony by people who claimed that on Jan. 4, 2010, they saw her in the bar with her boyfriend who had picked her up and then dropped her to the floor. There was some confusion over the exact date this incident allegedly took place. Also, the police officer who investigated the New Years’ Eve assault on Sorensen said he watched the bar’s surveillance videos in the days before and after, and he didn’t see any incident involving Sorensen and her boyfriend.

In deciding the case, the Dept. of Labor discredited the stories about another injury to Sorensen on Jan. 4 and gave credit to Dr. Asfora’s testimony that the bar fight was a major contributing factor to her brain injury.

First, the bar argued the Dept. was wrong to find that the alleged second, non-work-related injury to Sorensen on Jan. 4 didn’t occur. The bar argued that the investigating police officer’s testimony should be discounted because he didn’t watch all of the surveillance tapes.

But the Dept. found the police officer’s testimony to be credible. The court said there was ample evidence to support the finding that the alleged second incident didn’t occur.

Second, the bar questioned whether the work-related injury was a major contributing cause of Sorensen’s major brain bleed. Her employer relied upon the testimony of the doctor it hired who said her injuries from the bar fight didn’t cause the hemorrhage because she didn’t suffer symptoms until seven days after the fight.

The court found no reason to overturn these findings made by the Dept.

The third argument was that the Dept. erred in admitting testimony from a second medical expert for Sorensen due to a technicality.

But the court ruled excluding the second doctor’s testimony in this case “would only have stifled the Department’s truth-finding process.”

So the court ruled the Dept.’s decision should be upheld. Sorensen should receive workers’ comp benefits to cover the medical expenses related to the first two surgeries and for wage-replacement.

This case shows a not-uncommon outcome when a workplace injury exasperates a pre-existing medical condition: If the work injury is a significant factor, the employee can receive workers’ comp benefits.