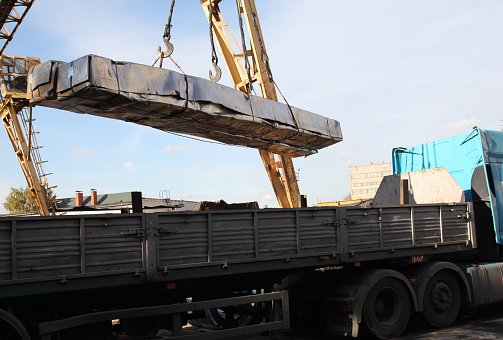 A company appealed a safety fine following an incident that caused a worker to suffer the amputation of his lower leg after a 100,000-pound gantry crane ran over it. Now a court has weighed in on whether the fine should stick.

On July 10, 2007, Moises Cordero was working as a groundsman for Clark Pacific, a company that manufactures and installs precast concrete walls in California.

Cordero and another employee were moving precast concrete panels to be loaded onto trailers. The other employee was operating a gantry crane which knocked Cordero to the ground. The crane’s rubber tire rolled onto Cordero’s foot and upper ankle, then backed up and ran over his leg. The crane and its load weighed about 100,000 pounds.

Cordero’s lower leg was amputated as a result.

Cal/OSHA issued four citations to Clark. On appeal, an administrative law judge threw out two citations but affirmed the other two.

Clark took its appeal of one of the two remaining citations to court.

The company’s argument: The specific reg didn’t apply to its crane. Instead, another reg should apply.

Clark’s gantry crane’s tires are 48 inches in diameter. Each tire has a small metal bar guard, located about 20 to 24 inches above the ground. Clark’s cranes run on an asphalt surface.

“Gantry, tower, hammerhead, or portal crane trucks and wheels shall be equipped with wheel guards or be otherwise similarly guarded at both ends of each truck to prevent a person being crushed beneath the wheels. The clearance between the guard and the rail or running surface shall be such as will afford maximum protection against crushing injuries. Wherever practicable, one half of an inch clearance shall be maintained.”

Clark said its crane was operated throughout its plant, not on a rail or special running surface. The company argues that a different regulation, which requires the wheels to be guarded “to the lowest practicable level above ground” should apply instead.

In other words, Clark was trying to say that the asphalt or sand its crane operated on wasn’t a specialized “running surface.” It also argued that it would not be practical to lower the guards to provide only a half inch of clearance.

Four or six inches is a big difference between 20 or 24 inches.

And one court after another has found that there’s nothing in the regulation to prove that “running surface” refers to some kind of special surface. An administrative law judge, a trial court and now a state appeals court have all ruled that the asphalt or sand on which Clark uses its crane qualifies as a running surface.

Clark also tried some other arguments to get the citation and fine thrown out. Among them: the fact that the crane in question had been in operation for over 30 years without anyone being injured before Cordero was. The appeals court recently ruled that it agreed with the trial court’s assessment of the situation that stated:

“Even if [Clark] believed in good faith that the gantry crane’s wheels were adequately guarded in this case, based either on the opinions of other operators or on its own accident-free history of operations, such belief is essentially irrelevant here given the openly visible nature of the violation.”

In other words: It doesn’t matter that you had 30 years of injury-free operation with the machine. The one injury you had after 30 years was enough to show it wasn’t safe.

(Try telling the man who lost his leg that the crane was safe.)

So the appeals court recently upheld the citation and the $18,000 fine.