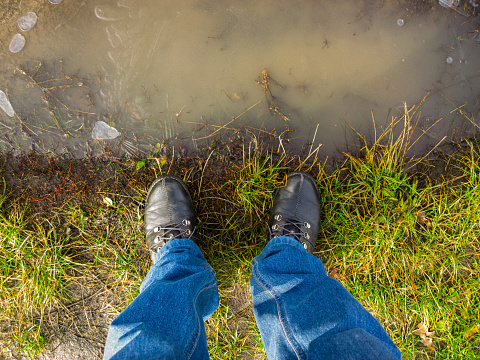 An employee had a seizure while working in a remote area, fell face-down into a puddle of water and drowned. Should her husband receive workers’ compensation death benefits?

Jacqueline Harvey worked as a water meter reader for the City of Bridgeport, Illinois. The first day that she worked alone, she had to read a meter located in some woods in a low-lying area that was about two feet below the road surface. The area flooded when it rained.

Occupants of the nearby residence noticed Harvey’s car running with no one in it. A short time later they found Harvey, face-down in the eight-inch deep pool of water.

She was pronounced dead at a hospital.

The coroner’s investigation results said Harvey was trying to read a meter when she died. The cause of death was drowning due to clinical seizure. Harvey had suffered from grand mal seizures.

Harvey’s husband filed for workers’ compensation death benefits. The City denied the claim on two grounds. It said Harvey was a contractor, not an employee. And it also said her death shouldn’t be considered in the course and scope of her work.

An arbitrator agreed with the City that an employee-employer relationship didn’t exist between Harvey and Bridgeport, and that she didn’t suffer an injury that arose out of and in the course of her employment.

Harvey’s husband appealed to the Illinois Workers’ Compensation Commission which reversed the arbitrator’s decision on both issues. The Commission ordered the City to pay $2,069 for medical expenses, $8,000 for burial expenses, and $466 per week for 25 years or $500,000.

On appeal, a state circuit court upheld the Commission’s ruling. The City appealed again. Recently, an Illinois appeals court issued yet another ruling in the case.

Employee or contractor? Most important factor

While the appeals court noted that no single factor determines whether a worker is an employee or a contractor, the single most important factor is whether the employer has a right to control the person’s actions. The City argued it didn’t control Harvey’s actions – it didn’t control the hours, days or method in which she performed her tasks.

The Commission found Harvey had some flexibility in her duties. However, she had to read 1,200 water meters during an allotted eight-day period each month during daylight hours. If she wanted to change the time frame to read the meters or if she was unable to read all the meters, she had to contact the City. For those reasons, the Commission found the City controlled Harvey’s work.

For those reasons, the appeals court agreed with the Commission that Harvey was a City employee, not a contractor.

However, injuries resulting from an idiopathic fall are compensable if the employment significantly contributed to the injury by placing that employee in a position increasing the dangerous effects of the fall.

The City argued that Harvey’s employment didn’t place her in a position increasing the dangers of her fall because she fell in a rain puddle, which is common everywhere.

The coroner’s report on Harvey’s death noted the meter was located in a rural setting at an elevation about two feet lower than the road and that six to eight inches of water surrounded the meter. The City had excavated the area to install the water meter. Harvey had to step off the road into the woods and walk to the water meter to read it. The only reason Harvey would be in the area was to read the meter.

Finding that the general public isn’t routinely exposed to eight-inch deep floodwaters in secluded, low-lying woods, the appeals court ruled that Harvey’s death arose out of and in the course of her employment.