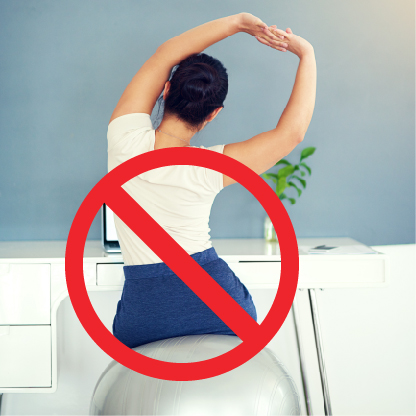 This employee suffered a concussion at work without even leaving her desk.

On July 28, 2016, Heidi Migliori, an administrative analyst at Northwest Arkansas Community College (NWACC), took a yoga ball from a co-worker’s office, and used it in place of an office chair at her desk while working on her computer. She’d never sat on a yoga ball before.

When she needed a book that was behind her, she instinctively turned and pushed off from her desk, as she’d do in a chair, which caused her to fall off the ball and hit the left side of her head on the desk.

She sought additional medical treatment on Aug. 1, 2016 because she still felt pain and had ringing in her left ear.

CT scans were normal. A radiology report said Migliori had been treated for postconcussion headache and other symptoms.

Two days later, Migliori still had symptoms and requested a referral to a chiropractor she’d seen previously for neck and back issues and migraines following a car crash in April 2012 in which she suffered severe whiplash.

She eventually saw an audiologist. That doctor’s treatment greatly improved her condition.

A doctor said Migliori couldn’t work for two weeks and had to be on light-duty for two more weeks after that. She was released to return to work without restrictions on Aug. 28, 2016.

Migliori sought workers’ comp benefits for her fall. NWACC rejected the claim, saying Migliori didn’t suffer a compensable injury and her need for medical treatment wasn’t related to the office injury but rather to pre-existing medical issues.

An administrative law judge ruled Migliori met her burden of proving she suffered a compensable head injury and was entitled to medical and temporary total disability benefits. The Arkansas Workers’ Compensation Commission affirmed the ALJ’s opinion. NWACC appealed to a state court.

NWACC argued that Migliori’s fall didn’t occur. The college pointed out there were no witnesses and neither of the two co-workers who came to help her saw a bump, bruise or swelling on her head immediately afterward.

The appeals court said there was substantial evidence to support the finding that Migliori fell off the yoga ball. Migliori testified she reported the fall immediately. Two co-workers testified they found Migliori on her knees at her desk holding her head. They said it looked like she had been crying and was upset. Migliori reported the accident, emailed her supervisor, spoke with HR and the college’s nurse, and was referred to a clinic where she received treatment within hours of the fall. Medical records from that date corroborate Migliori’s testimony.

NWACC also argued Migliori’s symptoms were pre-existing conditions from her car crash. While she did have some ringing in her ears after the crash, the doctor who treated her said it was made worse after her fall.

The appeals court said the Commission had weighed the medical evidence and properly decided Migliori should receive workers’ comp benefits for her fall off the yoga ball.

And what about the whole idea of using yoga/exercise balls in place of office chairs? Studies say don’t do it. You’re better off with an ergonomic office chair. Exercise/yoga balls should be left for exercise and yoga.