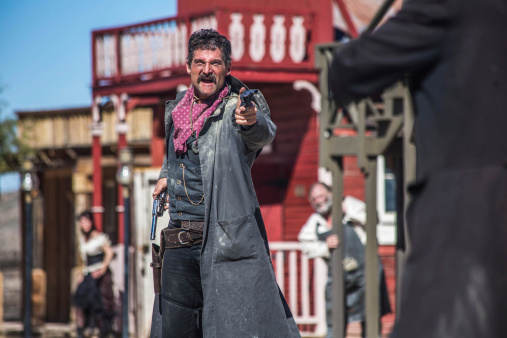 An actor was hospitalized after being hit with a bullet during a gunfight re-enactment in Tombstone, AZ. While officials there are emphasizing that this never happened before in Tombstone, a similar re-enactment years earlier in New Jersey left one actor partially paralyzed.

Tourism, including these re-enactments, is the only industry left in Tombstone, with a population of 1,300.

Groups perform shoot-outs telling the story of the gunfight at the O.K. Corral there in 1881 involving Wyatt Earp, his two brothers and others.

One such group, the Tombstone Vigilantes, was putting on a skit on Oct. 18, when actor Ken Curtis fell to the ground – and he wasn’t acting. He’d been shot.

Curtis was flown to a hospital where he had surgery. He’s in good condition, but no other details about his injuries have been made public.

A woman bystander was grazed in the neck by a bullet. She didn’t require hospital treatment. Hundreds of people were in the vicinity when the shooting happened. Bullets were found in the walls of two buildings.

The shooter in the case may face a charge of aggravated assault.

How did live ammunition get into the gun? One local media report says the actor who shot the gun was late to the show, and his weapon wasn’t checked beforehand.

After the shots were fired, officials found one live round in the weapon’s cylinder with five expended casings, which means the gun had held six live rounds before the skit.

Tombstone’s mayor has stopped future gunfight skits pending the town’s investigation. The town is also drafting an ordinance to provide more regulations for the re-enactments.

Scott Harris, once an actor at Wild West City in New Jersey, was left partially paralyzed by a shooting during a re-enactment in 2006. Harris had been playing the part of Wyatt Earp.

A six-year legal battle ensued in that case, ending with a $1.95 million settlement.

Harris will receive about $323,000. About $1 million will go toward Harris’ workers’ compensation insurance. The remainder will go to pay his attorneys.

Arizona Territorial Rangers, a group of re-enactors who performed at Wild West City, will pay $950,000 of the bills. Cheyenne Corp., owner of the land where Wild West City is located, will pay $1 million.

OSHA fined Wild West City $1,250 for a serious violations of the General Duty Clause for exposing employees to the hazard of being struck by bullets or projectiles when firearms were used to re-enact shootouts.

Wild West City appealed, but the fine was upheld by the Occupational Safety and Health Review Commission.