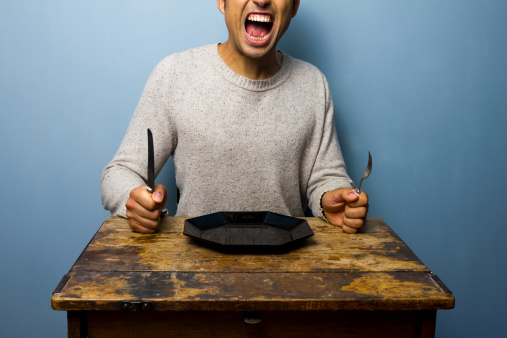 Here’s a unique reason for a worker to refuse a light duty assignment: A truck driver says he left the position because he’d “starve to death.” Oh, and he wants workers’ comp benefits in lieu of the job.

Ronald Brasher worked as a long-haul truck driver for US Xpress, dba US Express. On March 18, 2012, he had stopped in Rome, GA, to pick up cargo.

Brasher was turning a steel crank to connect his truck to a pre-loaded trailer when a leg of the trailer lowered suddenly, causing the crank to spin and strike him on the chest, back, neck and head.

He was taken to an emergency room. Doctors examined him and released him to return to work with direction to see a doctor within 24 hours.

The next morning, Brasher said he had numbness in his arms and face. On March 21, he was diagnosed at an urgent care center with neck strain and nerve damage in his face and upper arm. The doctor prescribed pain medication and placed him on modified work activity including restrictions on driving, reaching, squatting, lifting or pushing more than five pounds, and prolonged walking or standing.

Brasher continued to see doctors for the next couple of weeks who continued his work restrictions. On or about April 5, US Express offered Brasher a light-duty position at its terminal.

When he reported to work, Brasher asked his site manager for a $25 advance to purchase food to take his medications. His request was refused. After working about five hours, Brasher told the site manager he wasn’t going to stay on the job and “starve to death.” He went home and hasn’t worked since April 9, 2012, although the light-duty job was still available to him.

An administrative law judge (ALJ) heard the case and ruled:

The Georgia Board of Workers’ Compensation upheld the ALJ’s ruling. Brasher took his request for TTD benefits to the Court of Appeals of Georgia.

Georgia law provides a two-prong test in cases like these:

The appeals court said the evidence supported the finding that the light-duty job offered to Brasher was appropriate. Specifically, Brasher would have worked in the terminal guard shack, checking that US Express’s drivers were wearing their seatbelts.

The job didn’t involve any lifting, prolonged standing or walking, pushing or pulling, reaching above the shoulders, or squatting or kneeling.

Brasher argued he was justified in refusing the light-duty job because he had no money to buy food to take with the medications he was prescribed for his injury. The court disagreed with his argument.

The ALJ had found Brasher’s testimony about his refusal of the light-duty job wasn’t credible. Despite his claim he’d “starve to death,” evidence showed US Express put him up at a motel where breakfast was included and his supervisor offered to buy him lunch for four days.

Based on those facts, the appeals court found the ALJ was justified in denying continuing wage benefits under workers’ comp for Brasher because he didn’t have a justified reason for rejecting the light-duty job.

Note: This ruling doesn’t let the company’s workers’ comp policy off the hook for medical benefits. The ALJ’s order that the company continue to pay for his medical treatment related to his workplace injuries continued to be in effect.