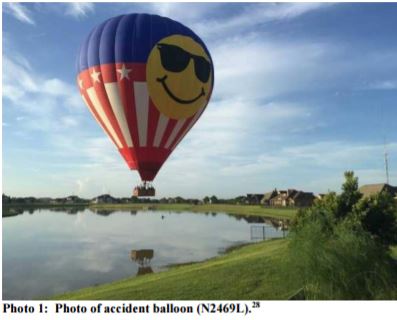 The National Transportation Safety Board says a hot-air balloon pilot had multiple drugs in his system, including an opioid painkiller, when a crash killed 16 people.

The NTSB is investigating the crash on July 30, 2016, that killed pilot Alfred Nichols and 15 passengers. The balloon, operated by Heart of Texas Balloons, struck electrical transmission lines and crashed in a pasture near Lockhart, TX. The balloon burst into flames and was destroyed.

The crash had the highest death toll for a U.S. aviation incident in seven years, the highest since a commuter plane crash near Buffalo, NY, in 2009 killed 50 people.

A toxicology report on Nichols showed seven drugs in his system, including:

Bloomberg News reports Nichols was able to continue flying even though he was convicted five times for driving while intoxicated and three times for drug offenses.

Weather was also a factor. Weather observations on July 30 noted low clouds and fog in the area. Six industry representatives at an NTSB hearing on the crash all said they wouldn’t have flown that day based on the weather report.

Federal Aviation Administration regulations for flying balloons differ from those that apply to other aircraft. Balloon pilots are prohibited from flying while taking some of the drugs either prescribed for or found in Nichols’ system, but they’re exempt from periodic medical checks required for other commercial flight crews.

The FAA is working with the balloon industry to craft voluntary rules rather than go through the formal rulemaking process. The agency found that, before this crash, only four deaths had occurred in commercial balloon flight in 10 years. The Balloon Federation of America estimates at least 100,000 to 200,000 people fly on commercial balloon rides each year.

The National Safety Council has focused on the problem of increased use of opioid painkillers in the U.S., stating that drug overdoses are now a “national epidemic.”