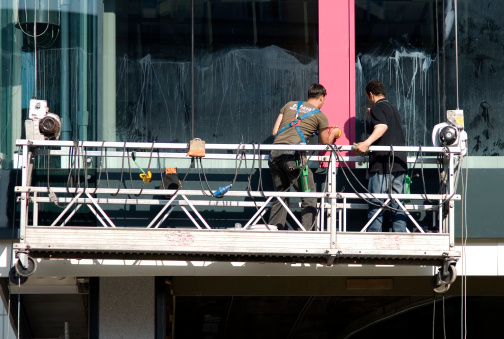 You might not think of a car as a particularly soft surface to fall on. But in the case of a window washer in San Francisco, landing on the vehicle likely saved his life.

The worker fell from the roof of the 11-story Sterling Bank & Trust building onto a moving car in San Francisco’s busy financial district.

Had the car not been passing by, the worker would have fallen onto pavement.

The unidentified worker suffered a broken arm and injuries to his left side. He was taken to a hospital in critical condition. The victim was conscious when he was transported, according to police.

KCBS radio reports the window washer and a co-worker were adjusting their cables from the roof while their working platform laid on the ground. Something went wrong, and the one worker fell, landing on the back part of a Toyota Camry’s roof and then rolling onto the pavement. The back window of the car was shattered. The driver of the car wasn’t injured.

How did the window washer survive the fall? Paul Doherty, a physics professor at the Exploratorium in San Francisco, told KCBS the car was critical in minimizing the force of the worker’s impact by spreading it out and because the car crumpled under him.

Doherty says the roof of the car crumpled more than a foot. Movie stuntpeople break falls by landing in material that will crumple 3 feet or more.

It’s also similar to how vehicle airbags work: They collapse under the body’s impact, more gently spreading the force of the impact on the body instead of hitting the dashboard at the speed the vehicle was traveling.

The window washer worked for Century Window Cleaning, based in Redwood, CA. ABC7 news in San Francisco reports that the company hasn’t had any recent Cal/OSHA violations, but it was fined $6,740 in 2008 and settled for $2,720.