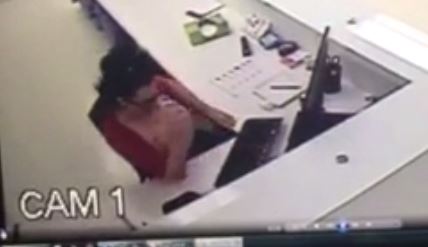 An office worker says part of a sprinkler head fell from the ceiling above her desk, bounced and hit her on the head. Well, only part of the story is right, according to surveillance video (click through to see).

Sheyla White worked for Cinque Terre Energy Partners LLC in Florida. White claimed she was struck in the head by the sprinkler head.

Cinque Terre promptly filed a workers’ compensation claim. But the company’s insurance carrier, AmTrust North America, grew suspicious of the claim and referred the incident to the Division of Investigative and Forensic Services (DIFS) within Florida’s Department of Financial Services. As part of its investigation, DIFS requested video surveillance footage which showed a story that differed from White’s.

The video (see it here) shows the piece of the sprinkler head fall onto White’s desk – but it doesn’t bounce. White picks the broken item up, looks around apparently to ensure she was alone, and then hits herself in the forehead with it. (Oddly, she looks kinda dazed after hitting herself in the head … maybe she hurt herself more than she thought she would.)

White was arrested and taken to jail. She faces two counts of workers’ comp fraud and up to five years in prison if convicted, according to Florida’s Chief Financial Officer. White was arrested in 2010 for stealing students’ identification information while working as a high school teacher. She was sentenced to six months house arrest for that crime.

According to the National Insurance Crime Bureau, workers’ compensation fraud amounts to $7.2 billion per year across the United States and is the fastest growing segment of insurance fraud. The $7.2 billion includes three categories of workers’ comp fraud: employer fraud, employee fraud, and provider fraud.