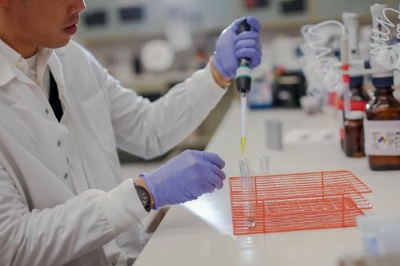 When it comes to employee drug use, there’s good and bad news. The good news: The positive rate for the U.S. workforce has declined 74% from 1988 to 2012, according to Quest Diagnostics figures. The bad news: … Positive rates for amphetamines and prescription opiates (pain relievers) have increased. In fact, you might call the abuse of those two types of drugs, “the new U.S. drug epidemic.” Positive rates for amphetamines were 196% higher in 2012 than in 1988, according to Quest. Abuse of prescription opiates has also steadily increased over the last decade — more than doubling for hydrocodone and hydromorphone and up 71% for oxycodone. 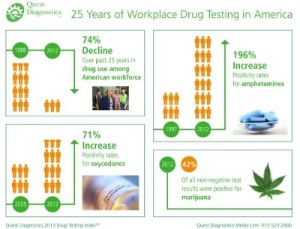 One reason for the opiate problem is that they’re being prescribed more often.

Quest found 60% of those tested in 2012 misused their prescription drugs. Of the group misusing drugs:

Misuse was statistically the same for both genders and all age groups.

Opiates abused almost as much as pot

Marijuana continues to be the most abused drug. It was detected in 26% of patients who had “inconsistent” test results (those tests in which a problem was detected). Opiates were the second most abused drug at 22%. By comparison, cocaine is much lower at 8%. Recreational pot users were more likely to misuse other drugs: 45% of people who used marijuana recreationally also used other non-prescribed drugs compared to 36% of non-marijuana users. The most commonly detected other drugs in pot users were sedatives and narcotic pain relievers. Two states, Colorado and Washington, recently decriminalized recreational use of pot, and 18 states and Washington, DC, allow medical use of marijuana.

Quest’s latest report on employee drug use coincides with the enactment of the Drug-Free Workplace Act on Nov. 18, 2013. The Act requires federal contractors and all federal grant recipients to provide drug-free workplaces. That means a lot of businesses aren’t covered by the Act, but its enactment is still credited with increasing awareness of the problems of drug use for workplaces. Quest’s figures are based on more than 125 million drug tests since 1988, including 227,402 tests performed in 2011 and 2012.