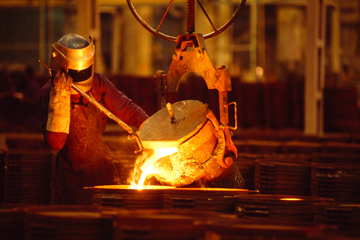 OSHA is investigating an incident that caused seven workers at a plant in Wisconsin to be injured during a molten metal spill. Turns out the owner of this plant expressed his displeasure with OSHA less than two years ago.

The workers were on a platform next to a machine used in brass casting when the equipment failed and the platform collapsed. They were burned on their backs and legs.

Four workers were admitted to the burn center of a Milwaukee hospital about a half hour drive from the plant. Two were flown there by medical helicopter. The other three injured workers were treated and released from a local hospital.

In a statement, Johnson said, “For more than one hundred years, my family has taken great pride in our safety record … we are all deeply saddened by the accident at our plant.”

The incident at the plant wasn’t the first time Johnson was quoted in the media regarding a situation related to OSHA.

In a 2012 Wall Street Journal article published just days before the November presidential election, Johnson said he’d never been audited by more federal agencies than under the Obama administration.

The WSJ article highlighted how some business owners had thrown their support behind Mitt Romney because of burdensome government regulation.

Johnson also said OSHA had subjected his company to duplicate inspections costing into the six-figure range. The company owner said he would rather have spent the money on new equipment to create more jobs.

According to OSHA records, in an inspection opened in January 2011, Johnson Brass received 13 OSHA citations – 5 serious, 8 other-than-serious. The serious citations were for lead exposure, lockout/tagout and machine guarding violations. The company reached an informal settlement with OSHA, paying $6,815 in connection with the 5 serious violations.

While Johnson settled that case with OSHA, another company which even more publicly criticized the agency had to be taken to court.

A court ordered All-Feed Processing and Packaging of Galva, IL, to pay almost $42,000 in fines for contempt and attorney’s fees in a dispute with OSHA. The company was also ordered to pay almost $11,000 in attorneys’ fees.

The dispute was over whether OSHA could inspect the pet food production and packaging facility.

All-Feed had posted videos on YouTube Calling OSHA the “oppression of American business.” It also posted on its website that OSHA had been harassing the company.