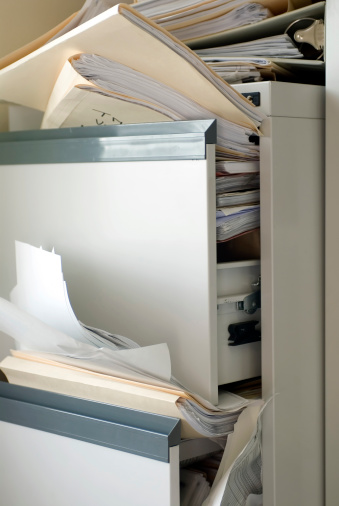 The injury was unusual to begin with: Pulling papers from a filing cabinet caused a back injury that ultimately required surgery. But then this question came up: Was the back injury really caused by work or an existing condition?

First, here’s what happened to Tammy Moore-Ransdell, a deeds clerk for the Randolph County Assessor’s office in Missouri.

On Feb. 26, 2008, Moore-Ransdell was updating records and needed folders from the bottom file drawer which she described as “extremely full” and “jammed up.”

She had to squat and twist to remove the file from the tightly jammed drawer. Immediately she felt pain in her low back. The next day she had too much low back pain to get out of bed.

On March 1, 2008, she spoke to her supervisor about her injury and went to see an orthopedic surgeon. She had low back pain and numbness in her entire left leg.

She continued to seek medical treatment on her own, including from Dr. Thomas Highland, a board-certified orthopedic surgeon. Dr. Highland referred her for physical therapy and pain management, but her pain worsened.

In August 2010, tests showed the three degenerative discs had gotten worse. Three months later, she had surgery. Her back and leg pain improved afterward.

A month before the surgery, Dr. Highland wrote, “I clearly feel that her continuing symptoms and her need for surgery are directly related to the work injury in February 2008.”

In October 2012, a hearing was held before an administrative law judge on the issue of Moore-Ransdell’s workers’ comp claim.

At the hearing, Dr. Highland testified, “The injury caused the condition that I treated her for … it caused the injury and the problem for which we eventually did do the surgery.”

Dr. Highland said, ” … injury to the muscles and ligaments … is usually a more short-term issue … [the work accident] triggered a pain from the underlying discs.”

In November 2011, Dr. Highland said Moore-Ransdell reached maximum medical improvement. She was permanently restricted from lifting over ten pounds, frequent bending, prolonged sitting and prolonged standing. The doctor said she was 25% permanently and partially disabled as a result of the work injury.

The Missouri Labor and Industrial Relations Commission upheld the ALJ’s decision. Randolph County took its case to the Missouri Court of Appeals.

Chicken or the egg?

On the first point, the appeals court found the employer mischaracterized the risk. The court said Moore-Ransdell didn’t simply bend over. She squatted down to pull out a lower file drawer that was extremely full and twisted to remove the file from the tightly packed drawer. This was a risk to which she wouldn’t be equally exposed in normal life, the court said.

Regarding the second point, this is what Missouri workers’ comp law says about pre-existing conditions:

As written, the law forces courts to make a chicken or egg determination: Did the workplace incident trigger a pre-existing condition, or was it the prevailing factor?

The ALJ relied on Dr. Highland’s testimony that trying to get the files out of the drawer caused Moore-Ransdell’s low back condition and need for surgery. Her medical history showed she didn’t have back problems before the file cabinet incident.

A dissenting judge’s opinion characterizes Moore-Ransdell’s degenerative disc issues as inevitable. This is what the majority had to say about that:

What do you think about this decision? Let us know in the comments.