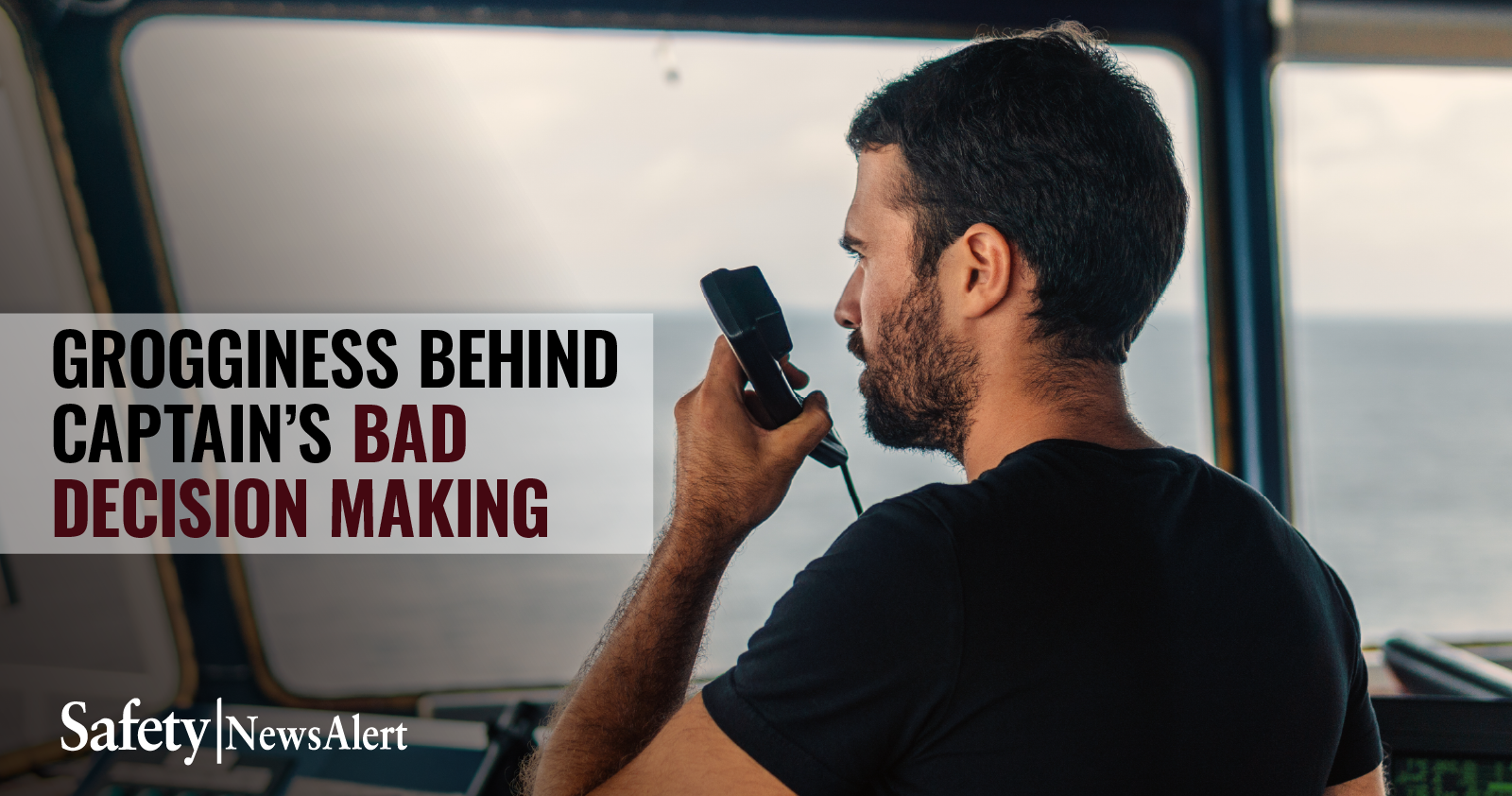 As a safety pro, you know about the hazards of fatigue, but do you know what sleep inertia is and how it could affect workers for 30 minutes or more after waking?

Sleep inertia is that temporary feeling of grogginess felt immediately upon awakening, according to a National Transportation Safety Board (NTSB) investigative report.

This state usually lasts for about 30 minutes after waking but could last longer if a person is sleep deprived.

Loaded with 2M gallons of naphtha

Sleep inertia is what the NTSB says caused the captain of the towing vessel Ava Claire to strike a closed lock gate in the Gulf Intracoastal Waterway near Intracoastal City, LA, on the morning of March 22, 2021.

There were no injuries, and despite occurring at speeds under 5 mph, the incident resulted in $2.5 million in damage to the lock gate.

The day of the incident, the 84-foot-long Ava Claire was pushing two 298-foot-long by 54-foot-wide steel tank barges loaded with more than 2 million gallons of naphtha, a flammable hydrocarbon mixture.

The vessel was on its way down river to the Valero Port Arthur Refinery in Port Arthur, TX.

No problems were reported with the vessel’s steering or propulsion systems as it transited through the first lock it had to pass through on its way down the Gulf Intracoastal Waterway.

Captain didn’t get much sleep

The captain went to sleep at about 12:30 a.m. on March 22 after being relieved by the vessel’s pilot.

At about 5:15 a.m., the captain woke up and went to the wheelhouse to assume the watch early, just as the vessel was approaching another lock.

Despite company policy forbidding a change of watch during a “critical move” such as transiting a lock, the captain told the pilot he’d take over.

The pilot offered to take the Ava Claire through the lock before turning over the watch, but the captain declined and took the helm about five minutes before maneuvering into the lock.

Typically, a deckhand would give distance information regarding a lock to the captain via handheld radio, but the radios weren’t working properly that day, so communication was an issue.

To further complicate matters, a GPS system failed, which denied the captain his primary source of information on the vessel’s speed, so he had to judge speed by watching the lock wall out of his side windows.

As the Ava Claire approached the lock gate at 5:22 a.m., the captain misjudged the vessel’s speed and distance, causing it to strike the gate at 1.2 mph.

Despite the slow speed, the Ava Claire did an estimated $2.5 million in damage to the lock gate. Luckily, there were no injuries and none of the containers of naphtha were damaged.

The captain had 31 years of experience operating tow vessels similar to the Ava Claire, although he had spent more time operating vessels with slightly more powerful engines.

According to the NTSB, sleep inertia was the primary cause of this incident.

The incident occurred at 5:22 a.m., less than a half hour after the captain had woken up. He’d only had a little more than four hours of sleep.

As soon as he woke up, he went to the wheelhouse and took the helm just in time to begin maneuvering into the lock. He was likely experiencing the effects of sleep inertia at this time.

The grogginess and inattentiveness caused by sleep inertia combined with the challenges of the operating environment – the loss of GPS systems and communication problems – negatively impacted the captain’s ability to safely navigate the lock.

Those same sleep inertia issues also likely caused his poor decision making in taking the helm despite the company’s policy.

“Mariners should allow time to fully recover from sleep inertia before taking a watch and performing critical duties,” the NTSB report states.

The same could be said for truck drivers or any workers with safety-sensitive duties who may be getting less sleep than usual and have to start working while in sleep inertia’s groggy, inattentive state.

To avoid a similar incident, workers should get a full night’s sleep and have time to completely shake off the effects of sleep inertia before starting to perform tasks that are safety-sensitive in nature.