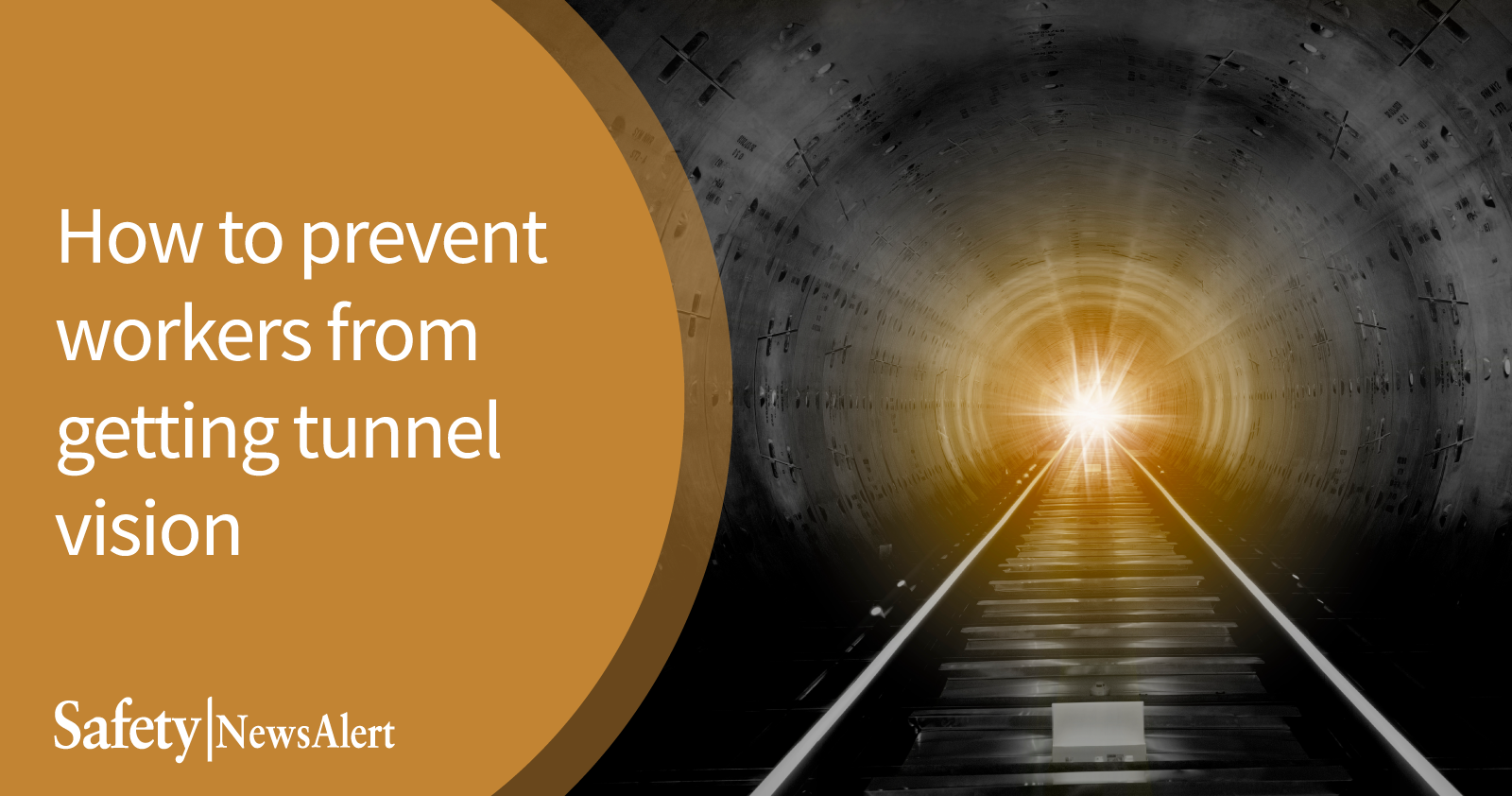 Safety professionals want employees to have good situation awareness and notice hazards before they’re affected by them, but sometimes it seems that the most obvious things get overlooked.

“(C)onscious knowledge of the immediate environment and the events that are occurring in it. Situation awareness involves perception of the elements in the environment, comprehension of what they mean and how they relate to one another, and projection of their future states. Situation awareness is influenced by a number of factors, including stress; it may be impaired by cognitive tunneling or social tunneling.”

Being able to perceive different elements and events in the environment, comprehending what they mean, how they relate and what they may lead to is important to workplace safety. To put it simply, if you don’t smell the gasoline or see the lit match, and fail to understand what the two mean in relation to each other, then you’re going to be in trouble.

What is tunnel vision?

While it may seem silly to think that an adult worker would walk into a situation where they wouldn’t take notice of an obvious danger like gasoline in the vicinity of an open flame, tunnel vision in the form of cognitive or social tunneling can affect a person’s situation awareness.

The APA says social tunneling is “a psychological state, usually associated with a demanding task or stressful environment, characterized by a tendency to ignore social cues that may be relevant to a task, such as spoken commands or alert signals from other people.”

In short, if a worker is performing a task that requires a great deal of focus they could easily miss an obvious hazard. Likewise, if they’re feeling stressed to perform a certain task – for example, “We need that truck loaded yesterday!” – that can narrow their focus and cause them to miss important details.

A July 13, 2021, incident at the Nyrstar Tennessee Mines in Knox County, Tennessee, illustrates how this sort of tunnel vision can affect workers and lead to fatal consequences.

Rocks, debris on mine floor

Gerald Turbyville was a miner with 10 years of experience at the Nyrstar mine. He and another miner, Kevin Norton, were assigned to work in an area of the mine designated as 17W-3. They took a telescopic boom lift with them to perform their work on the mine’s ceiling.

When the two men arrived at 17W-3 they found they couldn’t get the boom lift into position because the mine floor was covered with large rocks and mud. Another miner in the area said that rocks and mud had fallen from the ceiling the day before, which he moved before he could work. More rocks and debris had fallen since then. Some of the rocks were large enough that explosives had to be used to reduce their size before being moved by equipment.

They reported this to a supervisor who instructed the other miner to use explosives and a large front-end loader to once again remove the rocks and debris.

Concerns over task, not hazard

Turbyville and Norton reported concerns about the work they were to do on the ceiling of 17W-3 to two other supervisors, but none of their concerns involved the rocks that had been falling in the area. Instead, they were worried about where to position their boom lift to properly do their assigned work.

The two miners returned to 17W-3 before the rocks had been completely blasted and cleared to assist before beginning their own work.

The blasting crew member was thrown from the basket with his legs contacting the mine floor and his upper body hanging by his fall harness and lanyard, which were attached to the basket. Norton and the other miners in the area ran for cover from the falling rocks.

Norton told another miner to get help. They then helped free the blasting crew member from his harness and got him to safety before checking on Turbyville. Norton found that Turbyville didn’t have a pulse.

Turbyville was later declared dead on the scene.

Investigators with the U.S. Mine Safety and Health Administration (MSHA) found that mining had started in 17W-3 in 1975 and occurred only sporadically thereafter. Over 45 years, the area had deteriorated due to age and excessive mining. During the five years before the fatal incident, 17W-3 hadn’t been mined, with the exception of some exploration drilling. Mining resumed in June 2021, just one month prior to Turbyville’s death.

Interviews with miners revealed that they knew rocks had fallen in 17W-3. The broken, loose and hanging rocks were visible from the mine floor and could be seen more clearly when viewed from an elevated idle working place nearby.

There were clear warning signs regarding the hazard but none of the miners or supervisors working in the area noticed them. Everyone was so focused on the work at hand – clearing the debris and moving on to the actual job – that they overlooked clear signs of danger.

What can be done to prevent this sort of tunnel vision? According to Donald Groover, an Industrial Hygienist with Dekra Consulting, the answer lies in training workers to pause and take in their environment.

“This is about stepping back, engaging the brain and thinking about the level of exposure,” Groover said.

Workers shouldn’t rush into a job without first stopping to think about what they’re about to do and where they’re going to be doing it. They should take just a few moments to think things through and make themselves aware of any new exposures they’re about to get into.

Those few moments should be enough to allow them to think things through rather than just running on autopilot.