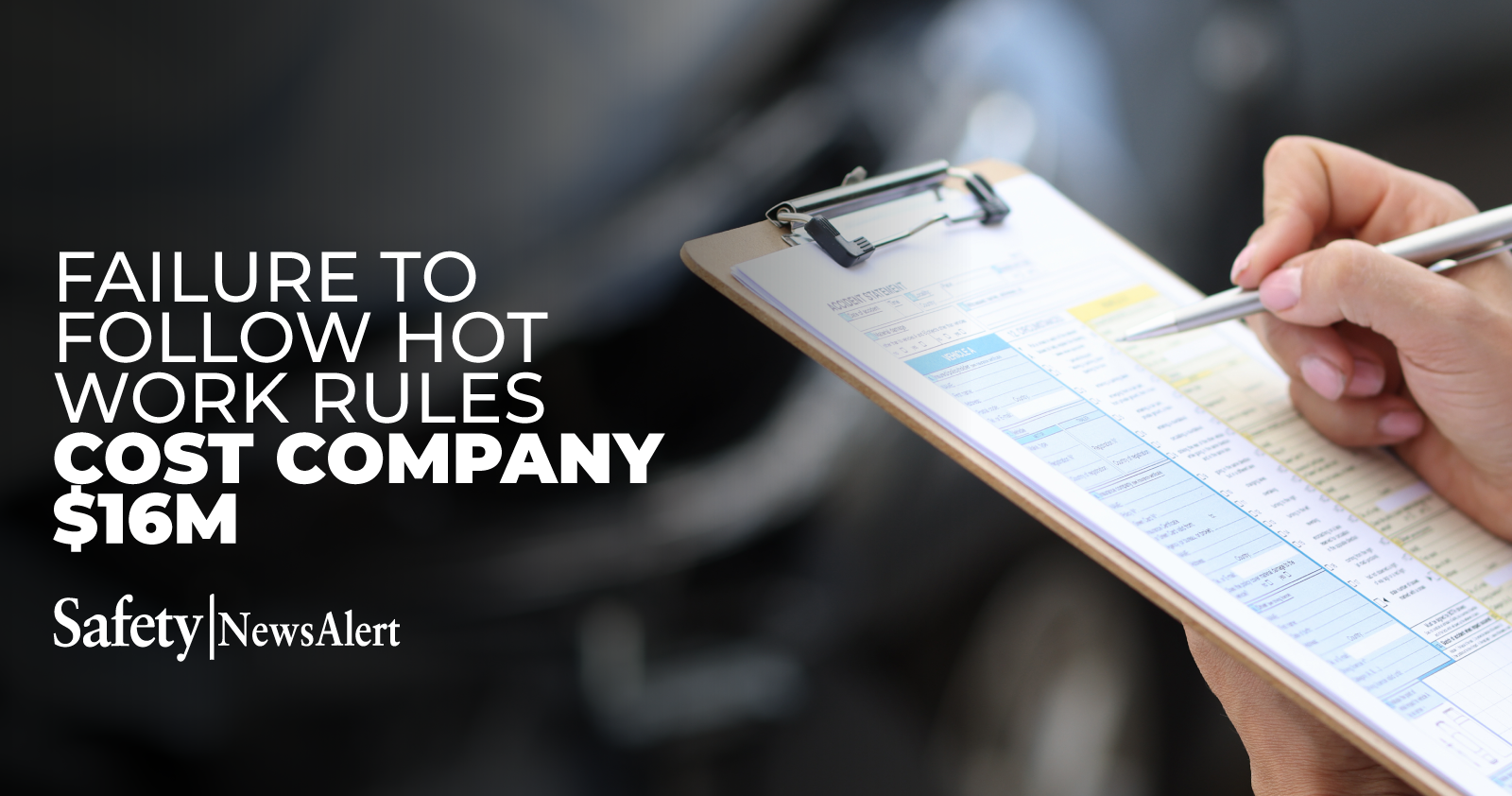 Supervisor buy-in to a safety program is important to a company’s overall safety culture. Period.

If supervisors fail to follow safety rules or prioritize production over safety, then employees are going to be much less likely to take the program seriously.

And sometimes in these cases, supervisors failing to follow safety rules can lead to disaster.

Take, for example, the Feb. 17, 2021, fire on board the fishing vessel Aleutian Falcon. No one was on the vessel at the time, so no injuries occurred, but several supervisors’ failure to follow hot work rules cost the company more than $16 million when the ship was declared a constructive total loss, according to the National Transportation Safety Board (NTSB).

The Aleutian Falcon had been docked at Trident Seafoods’ shipyard facility in Tacoma, Washington, for maintenance and repairs.

One of the items on the repair list was replacing a section of corroded steel bridge deck plating measuring 22-feet-long-by-20-inches-wide. Another area on the deck directly below this level also needed to be replaced.

This task required use of oxy-acetylene cutting torches and electric grinders with cutting wheels. Welding would need to be performed for installing the new deck pieces. The job was considered hot work because of the sparks that could be produced.

Further below decks, and directly under the two areas where the hot work would be done, a walk-in refrigerator and a large freezer were also getting some maintenance attention.

The refrigerator and freezer had been removed, leaving behind a wooden bulkhead of a sandwich-style construction and the insulation for both units. This type of bulkhead was difficult to adequately protect without removing it completely, but it was left in place.

Before hot work began, workers removed insulation and protective coatings in the area around where the job would be done and covered flammable materials that couldn’t be removed with fire blankets and fire suppression gel.

Prior to any of this work being done, Trident Seafoods’ port engineer followed standard procedures and met with a marine chemist aboard the vessel to show them where the hot work would take place. The chemist then issued a certificate allowing the work to be done as long as no decking was penetrated.

At the time, the engineer didn’t show the chemist the refrigerator area because he didn’t believe any hot work would affect that area.

The planned hot work was also typically discussed with the lead welder and the shipyard competent person (SCP), but the engineer couldn’t remember if he’d done so this time.

The lead welder and SCP walked through the area where the hot work was due to take place to verify that it was safe to proceed and the engineer had performed a similar inspection.

When the cutting began, fire watches were assigned to monitor the hot work areas, including in the walk-in refrigerator area. A small fire did break out on an upper deck at one point, but it was quickly extinguished by the watch and work continued.

At 10:32 p.m. a passing motorist called 9-1-1 to report that he thought he saw flames aboard the Aleutian Falcon. At 10:55 p.m., the local fire department arrived and began fighting the fire.

Why did precautions fail?

Investigators found the walk-in refrigerator area was the fire’s most likely area of origin, based on the damage found there.

Sparks and slag likely traveled from the deck above into the wooden bulkhead, igniting combustible materials in the area which led to a smoldering fire to become established in an overlooked area.

Fire alarms probably went off in the pilothouse, but the Aleutian Falcon was unmanned at that point, so no one was around to hear them and the fire was free to grow and spread.

But if the area of the hot work was inspected by management, a fire watch setup and precautions taken to protect flammable materials in the area, then how did this happen?

The port engineer, SCP and lead welder all understood that replacing the deck plating required cutting and welding, so they should’ve been aware the spaces immediately below would be subject to flames, heat and sparks.

But it’s unclear whether the engineer explained to the marine chemist who cleared the hot work that they’d be cutting through the bridge deck plating. The chemist issued a certificate that said the work must be completed without penetrating the bridge deck. The engineer signed the certificate.

It’s equally unclear if the chemist wasn’t aware, or clearly informed of, the hot work or if he simply made an error in writing the stipulation.

Investigators also couldn’t determine if the engineer or SCP noticed the stipulation and whether or not the lead welder was informed of the restriction listed on the certificate.

And while the engineer, SCP and lead welder all inspected the area before work began, as per OSHA and company regulations, had their inspections been thorough they’d have noticed the decks needed to be cut through and realized they were violating the conditions of the certificate.

Further, if any of them were confused by the restrictions on the certificate, they could’ve requested clarification from the marine chemist, but none of them did so.

Additionally, according to National Fire Protection Association (NFPA) standards, hot work shouldn’t have been performed on the bulkhead around the refrigerator area because of its sandwich-style construction.

The lead welder should have been aware of the bulkhead and the NFPA regulations, but there’s no indication he communicated about it to the SCP or the engineer.

With all of this in mind, the NTSB found the probable cause of the fire “was the company’s supervisory personnel inadequately planning for hot work.” Workers’ failure to adequately protect some of the hot work areas also contributed, according to the NTSB.