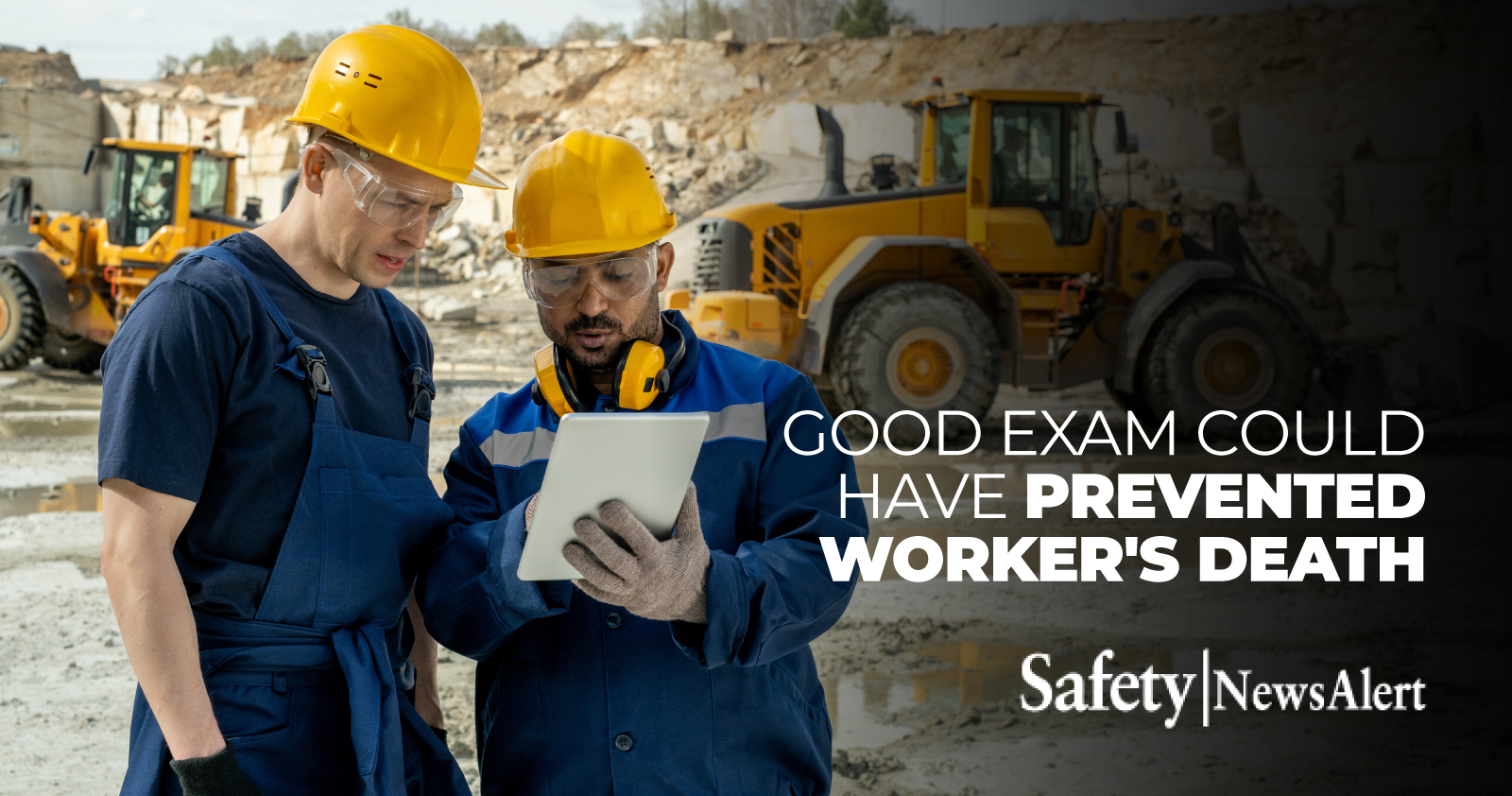 Safety professionals know that workplace examinations are important so hazards can be identified and corrected before employees start working.

Regular workplace safety exams can catch hazards that may otherwise be missed. And when those hazards are found they need to be corrected as soon as possible. Why? Because the longer the hazard is present the more likely an employee could be exposed to it, resulting in injury or even death.

For example, the U.S. Mine Safety and Health Administration (MSHA) investigated an incident involving an experienced lead technician who died when he became engulfed in crushed limestone. The incident occurred because of an unidentified hazard that a good workplace examination would have caught months prior.

Omar Thomas was a lead technician with 17 years of experience at the Palm Beach Aggregates (PBA) mine in Palm Beach County, Florida. PBA is a surface limestone mine that sees materials transported via overland belt conveyor to an onsite processing plant where the rock is crushed and sized before being stockpiled for sale.

Thomas’ regular duties at the mine involved leading a six-member crew to perform maintenance, repair and clean-up tasks.

At 4 p.m. on Dec. 6, 2021, Thomas and his crew were assigned to replace damaged wear plate liners in the processing plant’s vibrating pan feeder. The production shift had already emptied the belt conveyors and shut down the plant in preparation for the maintenance shift to perform these repairs.

However, the crew members could see that the slide gate was less than halfway across the four-feet opening, leaving a gap, and that there was still material in the feeder. They tried closing the slide gate again by opening it fully and then closing it, but it still wouldn’t close the whole way.

Bent piece of angle iron in the way

Case climbed into the feeder and began to cut the angle iron. As he worked, material began to fall on him and he noticed the piece of angle iron begin to bend downward from the weight of the material. He climbed back out of the feeder and told Thomas it was unsafe to continue.

After 20 minutes, they turned off the plant. Case suggested they continue operating the feeder for a little longer to ensure any loose material was knocked down, but Thomas disagreed. The two men tried to close the slide gate again, but without success.

Thomas told Case to climb into the feeder and attempt to cut the angle iron again, but when Case looked inside he could see a hole, four feet in diameter, extending upward through the surge pile for about 30 feet. This was a dangerous condition known as “coning-out” where material in the pile over an opening flows out and leaves a cylindrical void with almost vertical walls. Coning-out means the material in the surge pile is unstable and can collapse into the void without warning.

After taking all of this in, Case refused to do the work. Thomas told him to get out of the feeder and then climbed inside to cut the angle iron himself. While cutting, the tip of the torch got clogged up and Thomas told Case to go get a new tip from the truck parked outside of the tunnel.

As Case turned to leave, he heard a loud crash in the feeder. He turned to see that a mass of material from the surge pile had collapsed, fallen through the draw hole, filled the chute and feeder and engulfed Thomas.

Case began to remove material from the feeder by hand while yelling for Thomas and for help. Ten minutes later other members of the crew arrived. They dug with shovels, but when they still couldn’t uncover Thomas, they decided to run the feeder to help remove more material. At 6:57 p.m., the crew member who went to the control center to run the feeder called 9-1-1.

Eventually, running the feeder discharged enough material to expose Thomas. He had no pulse and wasn’t breathing, so the crew members took turns performing CPR. Emergency responders arrived at 7:11 p.m. and transported him via ambulance to a helicopter pad. He was resuscitated during transport but died from his injuries four days later.

MSHA investigators found the piece of angle iron, which may have been bent months before the incident by the teeth on the bucket of an excavator, was a contributing factor to the incident. No report was made of this damage prior to the surge pile being resupplied, which concealed the damage.

Investigators found the mine operator wasn’t conducting adequate workplace examinations because good exams would have caught the slide gate that wouldn’t close and the hazard presented by the coned-out, 30-feet-high surge pile. After identifying such a hazard, the mine operator would’ve been required to barricade the feeder from entry and withdraw all workers from the area.

One of the root causes identified in the investigation was that the mine operator didn’t identify and correct hazards in the workplace before work began.

To correct the problem, the mine operator has since implemented a training and tracking process on workplace examinations, along with an on-site audit program.

This will assure that competent individuals are conducting workplace examinations, correcting hazards and eliminating exposure to identified hazards before work begins at a jobsite.