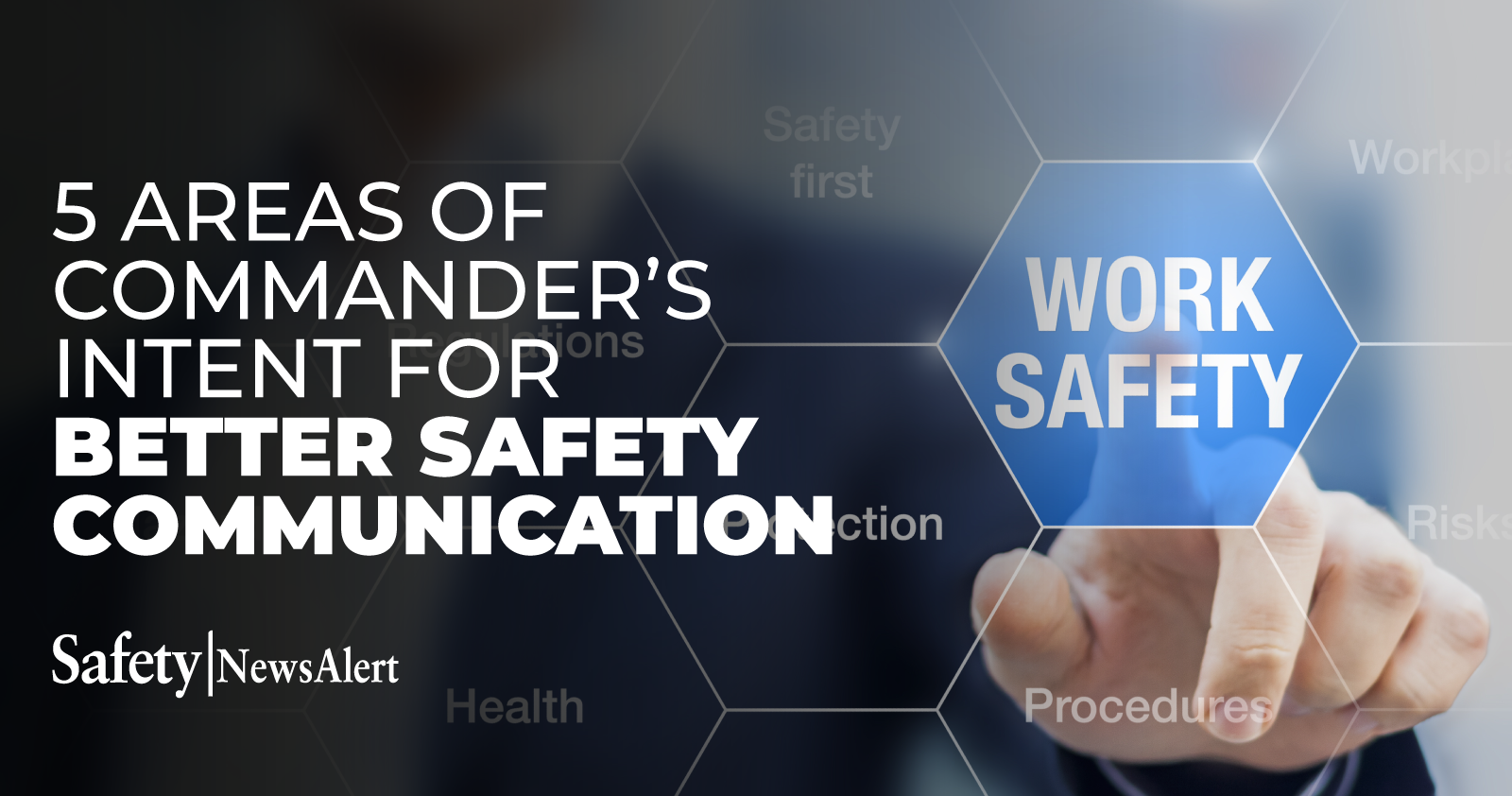 A safety consultant says taking a page from the military’s playbook — something called Commander’s Intent — can help companies achieve their safety goals.

In a presentation at the National Safety Council fall 2021 conference, Shawn Galloway, President/COO of ProAct Safety Inc., said Commander’s Intent is the overall purpose of something — the “why” it’s done.

Galloway said companies can leverage five areas of Commander’s Intent to communicate better so employees know the organization’s key safety objectives, what those objectives look like and why the company is going in particular directions.

What does safety success look like at your company?

If you asked several managers that question, would they all have the same answer?

Galloway said this is the first step in clarifying what safety success is: getting all managers on the same page.

Without that unity, Galloway said companies unintentionally create many different cultures within themselves.

In general, Galloway said success in safety isn’t striving for perfection. Instead, it’s striving for continuous improvement and the mindset that we can always be better.

To get there, Galloway said three things are needed:

Example: Cintas has a value called Positive Discontent. It means they celebrate their success but they know they can always do better. Cintas has also stopped using the term “best practice,” and uses “better practice” instead. Reason: If we adopt a best practice, we might stop looking for a better way.

A study out of Harvard sought to measure what really motivates people at work.

Thousands of people kept journals, documenting what they were doing when they felt the most and least motivated.

The overwhelming conclusion is that the best motivator is visible progress toward a goal.

Galloway said visible progress in safety has to be defined in observable terms so it’s possible to see we’re getting more of what we want.

Measuring a lack of injuries can lead to a dangerous mindset, Galloway said. If safety means not getting hurt, then doing anything that doesn’t get a person hurt must be safe. Galloway calls that flawed logic.

Although it may sound selfish, Galloway recommends answering the question “what’s in it for me?” (WIIFM) when it comes to safety.

The key is to make the answer to that question more personal.

Galloway said employees need to see how a company’s safety strategy translates to the thing people care most about: their family members.

Galloway asks: Do employees see themselves as actors in your overall strategy?

Of all the types of supervisors at a company, the most overlooked are the frontline supervisors, according to Galloway.

Yet, these are the people who can have the most influence on other employees about safety.

How supervisors spend their time needs to be decided within your own organization in alignment with Commander’s Intent. Where are we going? What does success look like? Take the answers to those questions to determine what individual leaders need to do to achieve the outcomes.

Galloways said safety pros need to evolve from grunts to guardians and then to gurus:

4. Recognition of initiative and ingenuity

Galloway notes that, in Marketing, there’s something called “reinforcing the buying decision.” It’s making you feel good about your purchase after the purchase.

An example of that is, after buying a new car, the salesperson calls you to make sure everything is going well and if you have any questions or concerns.

It’s all about creating a good experience, because negative experiences tend to persist in the mind longer than the good ones.

Engagement is made of three things, according to Galloway: buy-in, participation and ownership. To get employee buy-in, get them to participate in the process (developing safety). Then they will feel a sense of ownership.

Getting employees to be motivated is a three-step process, according to Galloway:

How do you reward people? Simple positive reinforcement. Something as simple as, “When you did this, it helped us go in a positive direction, and I appreciate that.”

It’s important for frontline supervisors to use positive reinforcement and adopt more of a coaching style instead of command-and-control.

What are the indicators that tell an organization that it’s going in the right direction regarding safety?

He said by measuring activities and results, companies fall into the correlation/causation trap: “We were doing these things and got better results, therefore let’s do more of these things.”

This leads some safety pros to have the difficult job of convincing upper management that, when it comes to safety, they’re not as good as they might think.

The hierarchy of controls goes, top to bottom, from elimination to substitution to engineering to administrative to PPE.

Let’s say a company has a year without a recordable injury. But where were most of the controls? PPE? That leaves a lot of room for human error.

Galloway recommends instead, companies measure the interface between what they’re doing and the end results.