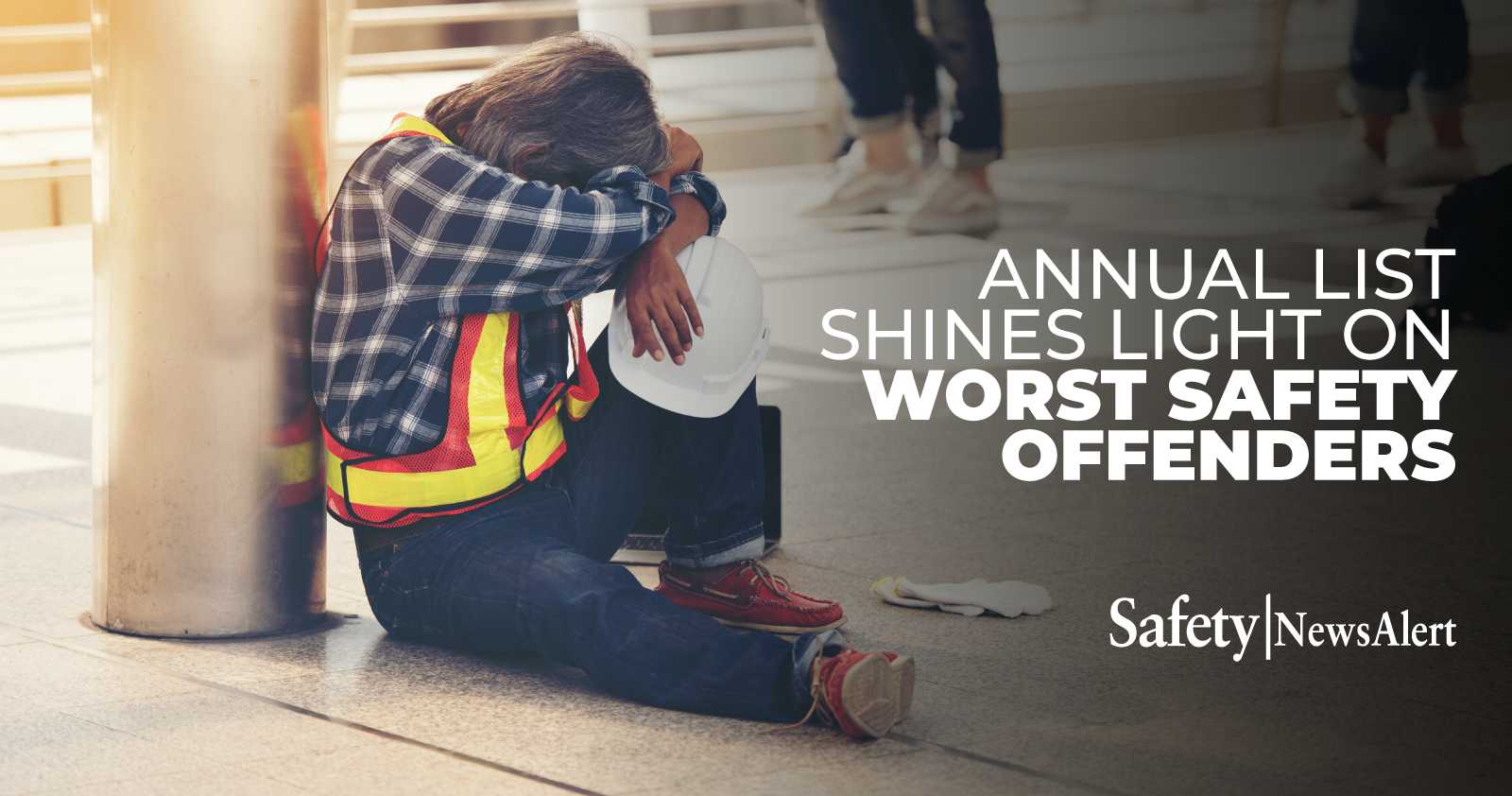 Amazon, Dollar General and Starbucks are among the companies who made the The National Council for Occupational Safety and Health (National COSH) Dirty Dozen list for 2022.

The Dirty Dozen is an annual list of the worst safety offenders and workers’ rights violators in the U.S. In making the list, National COSH solicits information from its network of health and safety activists about companies that put workers and communities at risk.

The list is released annually during Workers’ Memorial Week, April 25 through April 29, 2022, and coincides with the anniversary of the Occupational Safety and Health Act, which took effect April 28, 1971.

Isaiah Thomas, a worker from the same facility, said one of the workers who died had gone to human resources and said, “I’m not feeling so well, can I please go home.” He was told to return to work because he didn’t have enough unpaid time off.

National COSH says six other workers from the Bessemer facility have died since it opened in 2020, but the names of those workers haven’t been released at the request of their families.

The warehouse has injury rates of more than twice the industry average.

Laurence Moloney and his company, Atlantic Coast Utilities, makes the list after two of his workers, Jordan Romero and Juan Carlos Figueroa Gutierrez, died in February 2021 when a truck struck them, knocking them both into a trench.

In August 2021, OSHA proposed $1.3 million in penalties for the incident.

“This employer has ignored safety violations, failed to pay fines and shown a total disregard for the safety of its employees,” according to OSHA.

Moloney and his company ignored previous citations and refused to pay fines. In December 2021, Maloney was indicted for perjury for lying about past safety violations to falsely obtain a construction permit in Boston.

Wesley Rusk and Will Delashaw, employees of Daikin America, were exposed to toxic fluorocarbons from a tower outside the company’s Decatur, Alabama, chemical plant in July 2021.

Rusk died from lung failure caused by chemical exposure in August 2021. Delashaw died in September 2021 from severe lung injuries due to exposure to a “mysterious chemical.”

OSHA proposed $232,000 in fines for this chemical leak, citing the company’s failure to follow safety procedures.

A contract worker at the facility, Darby Dockery, was exposed to toxic chemicals in 2019 and was left with weakened lungs. She died from COVID-19 complications in 2021. Her family has filed a wrongful death lawsuit against Daikin.

Dollar General makes the list after reports from NBC News and Capital and Main allege the retail stores are generally understaffed and have become magnets for crime.

Workers claim they’ve been stabbed, shot, held at gunpoint, punched and pistol-whipped on the job.

The company, which has more than 17,000 stores in 46 states, hasn’t effectively addressed security risks, according to National COSH.

OSHA has found the company also has a persistent pattern of uncorrected safety violations at its stores, with repeat violations for hazards including blocked electrical panels, obstructed exits and housekeeping violations.

Since 2016, the agency has conducted inspections at 55 Dollar General stores with proposed fines of more than $3.6 million.

Sebastian Francisco Perez, an immigrant from Guatemala working for Ernst Nursery and Farms in St. Paul, Oregon, died during a heatwave on June 26, 2021. He was laying irrigation pipe when the temperature reached 105 degrees.

The initial cause of death was listed as cardiac arrest, but following a request from Oregon OSHA, an autopsy found the actual cause was hypothermia and dehydration.

Oregon OSHA found that workers at the farm had been last trained about heat hazards in April 2021, but Perez hadn’t started work until May.

The farm was cited for failing to train workers and provide protections from extreme heat, with a total proposed fine of $4,200.

In appealing the proposed penalty, the farm attempted to argue that employees should be accountable for how much they push their bodies.

The farm was cited by Oregon OSHA in 2014 for failing to provide water and toilets to its workers.

Less than two months later there was a release of toxic ammonia at the same plant with no fatal injuries.

Four workers had to be evaluated for injuries after an unplanned release of bleach at the facility in March 2022. That was the third chemical leak in 14 months.

Georgia Familias Unidas and Sur Legal Collaborative are providing ongoing assistance to victims, survivors and families and describe the plant as an “imminent danger” to workers, National COSH states.

OSHA proposed fines of nearly $1 million against Foundation Food Group and three other companies for the fatal nitrogen leak, finding the deaths were preventable. Another $154,000 fine was proposed for the ammonia leak.

The company was accused of interfering with worker interviews during the OSHA inspection.

Gold Creek Foods purchased “the assets but not the liabilities” of the company in October 2021. OSHA will continue to have jurisdiction over the worksite, however.

Hilton makes the list after suffering massive job losses during the pandemic and announcing permanent service cuts in July 2021 as a result.

The hotel chain no longer provides daily room housekeeping unless it’s specifically requested, except at its luxury brand hotels.

National COSH says, “Hotel housekeeping is a strenuous job which requires heavy lifting, exposure to toxic chemicals, the risk of sexual harassment and other hazards. U.S. hotel workers have injury rates 40% higher than overall injury rates in the service sector.”

The organization claims that rooms that aren’t cleaned daily become more difficult and hazardous to clean when guests check out.

Traveler’s United, a consumer advocacy group, says a lack of daily cleaning could also expose workers and guests to rodents and other unsanitary hazards when trash piles up in rooms and hallways.

Workers at Kingspan Light and Air, a skylight manufacturer in Santa Ana, California, found they were being exposed to severe indoor air pollution at work.

In August 2021, seven employees wore portable air monitors for three days during their work shifts. They also placed stationary monitors inside the factory. All of this was an effort to get an independent expert opinion of what they were breathing daily while working at the plant.

Dr. Shahir Masri, an air pollution scientist at the University of California, reported in October 2021 that there were high levels of small particulate pollution in several locations throughout the facility.

The levels observed inside the Kingspan facility were 25% higher than found in outside air during an outbreak of wildfires in California in 2020.

“Those were levels that were causing public health agencies to warn people to stay indoors and avoid exercise,” Dr. Masri said.

Kingspan workers were breathing air that was even dirtier for eight hours or more each day.

Employees filed complaints with Cal/OSHA about the indoor air quality and with the State Water Resources Board about excess levels of zinc being discharged from the factory.

In March 2022, 45 environmental organizations called on the green building community to reconsider partnerships with Kingspan, which describes itself as a “planet passionate” company, due to ongoing concerns about unsafe practices.

Laundry workers typically work in crowded back rooms and are exposed to toxic cleaning chemicals with little ventilation and no heat in the winter or air conditioning in the summer.

Employees at Wash Supply sought to form a union, which was certified by the National Labor Relations Board (NLRB) on Feb. 9, 2021. On Feb. 19, 2021, Liox closed the Wash Supply location and fired all the employees.

The NLRB found the company violated federal labor laws and ordered it to re-open the location, rehire all the workers and pay them for wages lost since they were illegally fired.

A massive tornado struck Missouri and three other states on Dec. 10 and 11, 2021, staying on the ground for four hours.

Nightshift employees of Mayfield Consumer Products, a candle manufacturer, heard warning sirens and asked to leave the building at 5:30 p.m.

However, five workers told NBC News that managers ordered them to stay on the job or be fired. Mayfield executives deny this happened and claim emergency protocols were followed.

Surviving workers have filed a class action lawsuit against the company over the alleged orders from management to ignore the tornado warnings.

Executives at a Refresco bottling plant in Wharton, NJ, refused to provide workers with PPE during a COVID-19 outbreak in March 2020 and maintained a punitive attendance policy that penalized workers who needed to quarantine, National COSH claims.

Employees voted in favor of union representation in June 2021, but the company refused to negotiate or address ongoing safety issues.

Workers filed a complaint with OSHA in November 2021. The company has been assessed tens of thousands of dollars in fines since 2018 for serious safety violations at its plants in Georgia, California, Texas and New Jersey.

The company has also been fined $393,000 for dozens of illegal pollution discharges from its Port of Walla Walla, Washington, plant.

After 10 of 30 workers at a Buffalo, New York, location tested positive or were exposed to COVID-19, they went on strike for five days in January 2022.

The strike took place after the company refused demands for better safety, including closing the store to allow sick workers to quarantine, provide masks and COVID-19 testing and allow workers the right to refuse customers who ignore local and state mask mandates.

In March and April 2022, the National Labor Relations Board filed complaints against the company, stating it had mistreated and illegally fired workers because they participated in union organizing efforts.